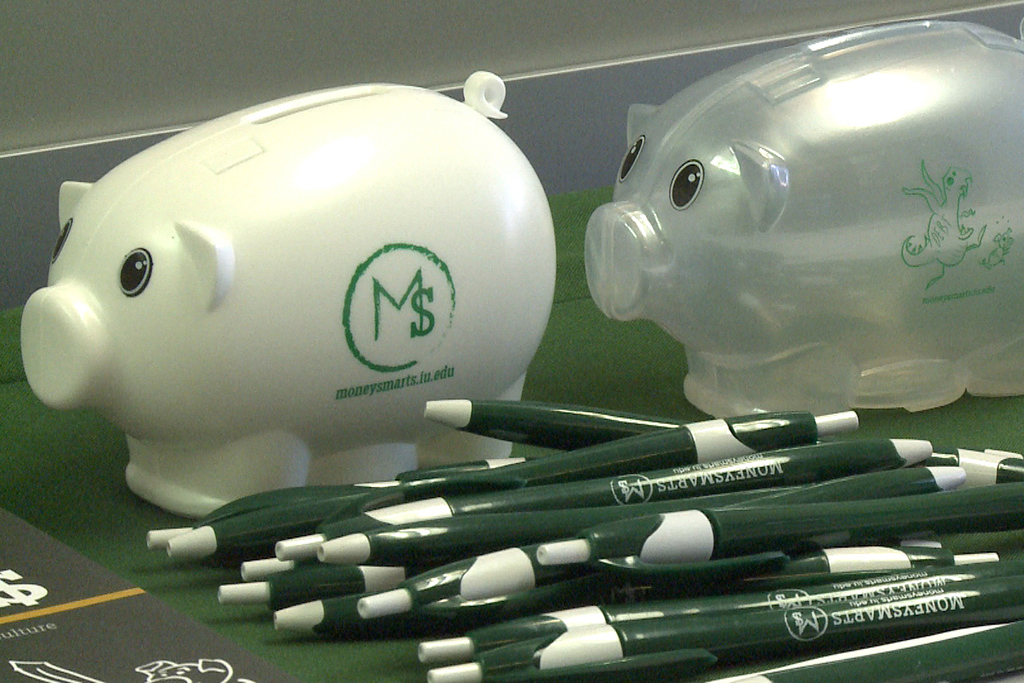 In 2017, IU launched a platform called MoneySmarts U to provide financial information to students before, during and after college. (WFIU/WTIU)

In the last decade, the number of students borrowing money has nearly doubled from 23 million to 43 million borrowers.

According to the Federal Reserve, the largest amounts of debt acquired was by 18 to 29-year-olds attaining a graduate degree.

Student loans are the most common form of debt used to finance education for both students taking on their own debt, and for parents and grandparents financing the education.

According to the Fed, 20 percent of those with outstanding student debt were behind on payments in 2017.

Students who struggle the most with payments and are most likely to fall behind are first generation college students.

Federal laws require that students receive some form of counseling to help them understand how much debt they are taking on, but the instruction is usually done online and is hard to follow.

Schools in Indiana and across the country are trying to remedy this by offering financial literacy programs. Indiana University credits its program, MoneySmarts, with lowering its total student loan volume by 17 percent from 2011 to 2015.

Phil Schuman says his program’s goal is to change the culture surrounding student debt and to encourage people to ask more questions about their personal finances.

“It’s not student debt that’s the issue, I think it’s excessive debt. We really want to make sure that we’re doing right by students, by educating them about what kinds of debt they should be taking out and making sure that they don’t go above a line that could certainly put them in a position of negatively affecting them for years to come. We do want students to work while they’re in school. There’s actually research out there that says students who work 10-15 hours a week, they’re actually going to be better academically.”

Doug Ummel says he encourages families who come to him for advice to consider other options aside from student loans to pay for school. Large amounts of debt can be harmful to individuals and is accepted too readily as inevitable by many paying for school. He emphasizes the need to live on a budget.

“When I started in this business 20 plus years ago, there really wasn’t nearly the crippling debt load that a lot of students come out with now. It was more, the kids that needed a little bit extra to get to school that took the student loans out. Now, the last statistic I saw the average bachelor’s degree graduate takes 21 years to pay off their loans, and that’s just ridiculous. That handicaps you, it hamstrings you for life.”

“Basically 529 plans allow folks to set aside post-tax dollars that can grow tax deferred and then earning on the investmets actually become tax-free at the point of withdraw. It’s really great because the use is just so broad. This isn’t just for tuition. It’s for room and board, books, fees, computers associated with higher education. They’re not just available to be used for traditional higher education either. These can be used for any institution that’s eligible to receive federal financial aid.”

Jim Kennedy says most students accruing enormous amounts of debt do not come from public universities. Across all IU campuses the average debt of a graduating student is $27,000. He says for dependent undergraduates, school funding is a partnership that extends past parents and children.

“It’s the state, it’s the federal government, and it’s also the institution to kind of work together on those different sources of funding. Obviously parents that have substantial income when they fill out the FAFSA, there’s an obligation there to contribute part. What happens sometimes, unfortunately for students, is parents have not planned for their kid’s education, and then of course the students get saddled with a lot of debt, which they shouldn’t really have. We understand everybody has a different situation, there’s hardships, things happen to people, but as we’re going through, I think it’s important to start that planning process really early on.”