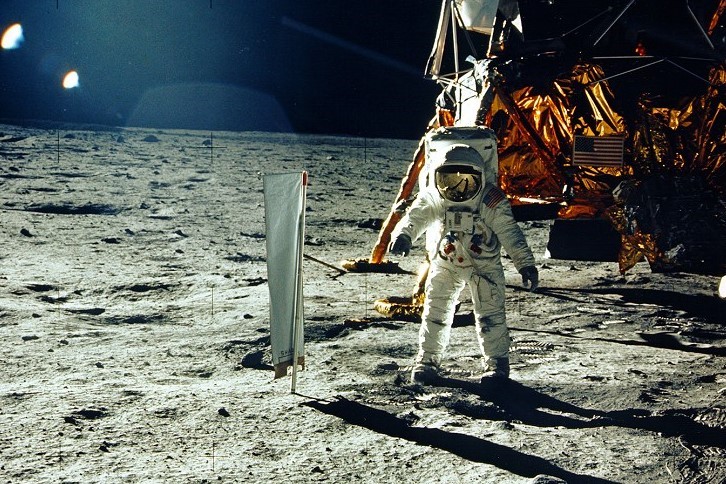 Astronaut Buzz Aldrin walks on the moon during the Apollo 11 mission, July 20, 1969. (Courtesy of NASA)

This week marks 50 years since NASA launched its first manned mission to the moon.

When Apollo 11 reached the moon on July 20, 1969, Neil Armstrong and Buzz Aldrin became the first people to traverse its surface. Michael Collins, the third crew member, remained in orbit around the moon.

During the expedition, Aldrin and Armstrong collected around 47 pounds of samples, took photographs, and conducted four experiments.

According to Greg McCauley, executive director of the Link Observatory Space Science Institute, the astronauts' life insurance did not cover them while they were traveling in space.

So, before departing, the three astronauts commissioned an artist to make a commemorative postcard depicting the moon landing. Three hundred copies were printed and signed by all three astronauts.

If they were to perish in space, 100 of the postcards were to be sent to each of the astronaut's wives, Patricia Collins, Janet Shearon (Armstrong's first wife), and Joan Archer Aldrin (Aldrin's first wife).

Through NASA and contracted work, the Apollo missions to the moon employed about 400,000 Americans.

The event is known as one of the most-watched events in TV broadcast history.

Join us this week as we talk about Apollo 11, how it changed history, and its ties to Indiana.

We want to hear your memories and comments about this moment in history. Click here to share.

Submit your questions and memories below and you might hear them on air!

"It seemed to me as child we could do just about anything…and I know it inspired a great many people to pursued STEM dispiplines. The fact that they have done so has probably inproved the quality of our lives worldwide," Deliyannis says.

Odom says Apollo 11 was an American accomplishment, but the world was watching and people viewed it as an achievement for humanity.

"It is transformative, you think about the decade of the 1960s, all the turmoil that was going on, the political divisions, the civil rights movement, urban riots, women's rights movements, the environmental movement, the Vietnam War, all of that happening in this context. But in 1969 the entire world could come together to the point where Ho Chi Minh could write a letter Lyndon Johnson saying how of an accomplishment this is in the midst of a war like that," Odm says.

Basu says it is important to do further research on the moon and get more samples of its surface.

Boomhower says Indiana has ties to the Apollo missions because of Purdue University and the astronauts that were trained there.

"Because of their engineering program and of course their aerospace program as well, was a great breeding ground for future American astronauts," Boomhower says.