Join Us At Hive To Celebrate 20 Years Of Noon Edition 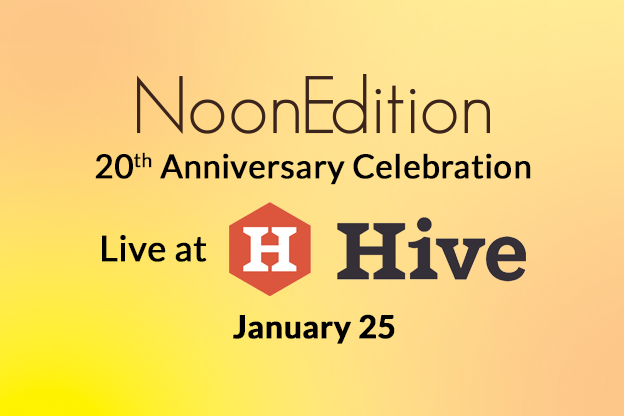 Noon Edition is celebrating 20 years on the air!

We're taking the show on the road for one day only and we’d like to see you there.

Our first broadcast was in September 1998. We’re celebrating by bringing back some of our favorite guests!

Congressman Lee Hamilton served as a member of the U.S. House of Representatives from 1965-1999. After leaving Congress, he founded the Center on Congress at Indiana University. Hamilton is a leading expert on foreign policy. He served as vice chairman of the 9/11 Commission and co-chair of the bipartisan Iraq Study Group. Hamilton has received numerous honors including the Presidential Medal of Freedom in 2015.

Dr. Jill Bolte Taylor is a neuroanatomist and author. Her New York Times Bestselling book “My Stroke of Insight,” is a memoir about a stroke she suffered, her recovery and what she learned from it. Bolte Taylor is the Chairman of the Board of Jill Bolte Taylor BRAINS, Inc., a not-for-profit organization dedicated to brain health awareness.

Helen May is the co-owner of May’s Greenhouse in Bloomington. She opened Mays Greenhouse with her parents and her sister Martha in April 1965. Helen is retired now. Helen is a frequent guest on Noon Edition for our twice yearly gardening shows (our most popular shows!) with Don Adamson, retired manager of Bloomington Valley Nursery​.​

We will broadcast Live from Hive on Friday, January 25.

Stop in between 11:30 and 1:30. See hosts Sara Wittmeyer and Bob Zaltsberg and enjoy the guest interviews.

Hive is located in Bloomington at 2608 E 10th Street at the corner of 10th and the Bypass. Join us for great food, great coffee, photo booth, live radio and plenty of free parking.

If you can’t attend, tune in on WFIU or catch us via Facebook Live.

Lee Hamilton served in the U.S. Congress for three decades and is disappointed with how our legislators are behaving, but he says there is still hope for our system of governance if we maintain our faith in it.

"The system worked for 225 or 240 years. It didn't work perfectly -- a lot of bumps and bruises along the way -- but it worked and you have rhythms in a democracy, times when things work pretty well and times when they don't," Hamilton says. "Now, the problem today is that we've hit a real ditch and it's going to be hard to get out of it. But the way to get out of it is not magic, the way to get out of it is to make the system work, and we know it can work. It has worked. The challenges are greater today in many respects but it can work and at the end of the day you have to have a fundamental faith in the system."

Jill Bolte Taylor describes the importance of biology in your mental health and behavior and how improved brain health within one person can have an effect on how we work as a society.

Helen May brought her considerable gardening knowledge to answer more questions from our listeners, including one who asked about how to deal with mealy bugs infesting their indoor plants.

"You have to be very persistent," May says. "There are a number of things you can use, your garden center can prescribe something for your situation. But, you're not going to get them the first time you treat them, you're not going to get them the second time, you're going to have to keep after them and when you think they're clean, check them again in two weeks because they can come back."