Playland At The Beach: Dave Brubeck's Early Octet And Trio 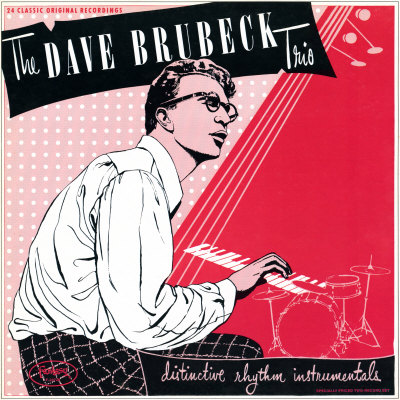 Chances are you‘ve heard Dave Brubeck before, even if you‘re not a jazz fan. His 1959 album Time Out has sold over a million copies and "Take Five," written by longtime Brubeck collaborator and saxophonist Paul Desmond, became a hit single and cultural musical staple. Brubeck made the cover of Time Magazine in 1954, did global tours for the U.S. State Department during the Cold War, and has enjoyed a long run as an icon of mainstream jazz.

But at the start of his career in the late 1940s Brubeck was studying with composer Darius Milhaud and pursuing experimental sounds with a group of like-minded youthful colleagues. As the leader of what came to be known as the Octet, Brubeck became a West Coast jazz pioneer. His small ensemble blended classical elements and jazz, achieving a sound that bordered on Third Stream and the avant-garde, and the recordings they made are among the most interesting of Brubeck's long career. The group is often compared to Miles Davis‘ Birth of the Cool project, but its music has never achieved a similar level of recognition.

Though the octet had a hard time finding paid gigs, they blazed a trail for Brubeck‘s later groups in one way by giving free concerts on California college campuses. Playing a kind of Third Stream music and doing "jazz-goes-to-college" performances, the Brubeck Octet in the late 1940s was clearly ahead of its time. Using counterpoint, expanded harmonies, and jazz rhythms, it created a compelling music of swirling density and shows us that one of America‘s most popular jazz artists came out of a modernist classical background.

Jazz historian Ted Gioia praises the Brubeck Octet in his book West Coast Jazz, writing that "The strong melodic material of popular song is wedded to the broad harmonic palette of classical music, the resulting hybrid drenched in that irrepressible rhythmic vocabulary that only comes from jazz." Jazz historian Allen Lowe touts the group as a

little-known jazz milestone…the recordings they made between 1946 and 1950 are something of a retrospective shock and revelation, sharply organized and musically substantial, running bebop through a spider‘s web of harmonic twists and turns and delivering it, in a modest but effective way, to a new, if very non-threatening, and radical (for its time) California fringe.

"Playland at the Beach" also features music from the piano trio Brubeck led at the end of the 1940s with bassist Ron Crotty and drummer/vibraphonist Cal Tjader. Formed in the wake of an abrupt professional betrayal by Brubeck‘s young friend and musical partner-in-the-making Paul Desmond, the trio rapidly gained a following in California, and its recordings began to receive national airplay, helping to launch the Fantasy Records label (future home of 1960s rock band Creedence Clearwater Revival).

Brubeck‘s early piano playing was more rhythmically aggressive than his later style and won praise from avant-garde jazz-piano icon-to-be Cecil Taylor, who said, "I was very impressed with the depth and texture of his harmony, which had more notes in it than anyone else‘s that I had ever heard. It also had a rhythmical movement that I found exciting."

A bizarre 1951 swimming accident in Hawaii would change the course of Brubeck‘s playing and his career. He and a chastened Paul Desmond would rejoin forces and go on to form one of the most popular groups in the history of jazz. "Playland at the Beach: Dave Brubeck‘s Early Octet and Trio" gives us the story and the music of Brubeck‘s prelude as a young, experimental West Coast jazz musician.