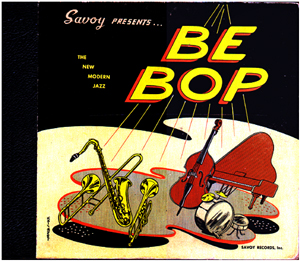 (UPDATE, October 23: Mosaic now has the track listing and pre-order link up on their website: Classic Savoy Bebop Sessions)

In the works from the venerable Mosaic Records: Classic Savoy Be-bop Sessions 1945-49, chronicling one of jazz history's most kinetic and revolutionary periods.

Savoy Records was a Newark, New Jersey-based label founded in 1942, and while it would eventually play a significant role in issuing African-American gospel, it first made its mark in the years immediately following the end of World War II with a slew of bebop releases. The ten-CD Mosaic Savoy set discography reads like a Who's Who of late-1940s bebop, including Tadd Dameron, Dexter Gordon, Allen Eager, Fats Navarro, Howard McGhee, Leo Parker, J.J. Johnson, Kenny Clarke, Milt Jackson, Brew Moore, Sonny Stitt, Stan Getz, Kenny Dorham, Ray Brown, and Kai Winding. The recordings that Charlie Parker made for the label, which have been widely available for years, are not included. (Parker's sides for a rival late-1940s jazz label can be found on Mosaic's Comnplete Dial Modern Jazz Sessions.)

The booklet will include an introductory essay on Savoy producer Teddy Reig by Bob Porter, and annotations for each recording session by Grammy-winning jazz critic Neil Tesser. The release date is estimated to be sometime in November.