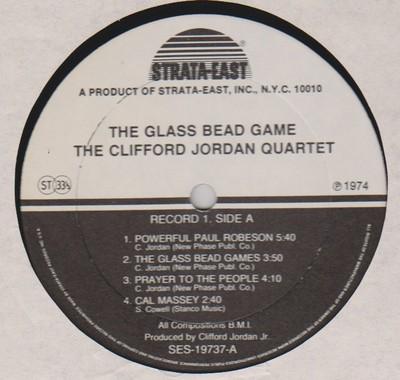 Mosaic Records, the stellar jazz label out of Stamford, Connecticut that has issued numerous historical box-sets of artists and themes since the early 1980s, is preparing to release a 6-CD set of recordings either made or produced by saxophonist Clifford Jordan. The Complete Clifford Jordan Strata East Sessions will cover Jordan's recordings both as a leader for Strata East (a musician-run label that yielded a treasure trove of 1970s jazz) and as a producer for sessions recorded by Cecil Payne, Wilbur Ware, Charles Brackeen, Ed Blackwell, and Pharoah Sanders (originally done for Frontier Press in the late 1960s and called "The Dolphy Series" by Jordan). The set should be out sometime in November.

Mosaic also reports that they are still angling for an October release of their Chick Webb and Ella Fitzgerald set, and that a set of Louis Armstrong concert recordings will likely see release as well in the next few months.

To hear some Strata East music from a previous Mosaic release, check out the Night Lights show Charles Tolliver On Strata East In The Early 1970s.