A Few Miles From Memphis: Harold Mabern, The Early Years 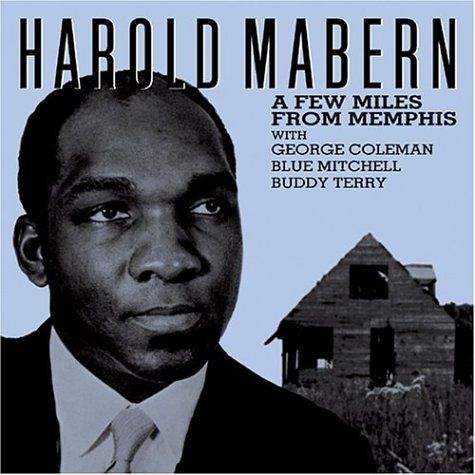 He was an unsung hero of the 1960s hardbop scene, performing and recording with many of its finest artists, and only in recent years has he begun to garner appreciation for his long-running legacy in jazz and the understated power of his talent; as critic Gary Giddins has written, "With the wind at his back, he can sound like an ocean roar." Night Lights pays tribute to the early recordings of pianist and jazz veteran Harold Mabern, who passed away on September 19, 2019 at the age of 83.

Mabern was born on March 20, 1936 in Memphis, Tennessee-a city that‘s a capital of 20th-century American music. Like fellow Memphis jazz artists George Coleman, Booker Little, and Frank Strozier, Mabern attended Manassas High School, and after an early attempt at playing the drums, he taught himself piano and fell under the spell of pianist Phineas Newborn Jr., an influence that would shape and linger with Mabern for the rest of his life.

Along with some other Memphis musicians, Mabern moved to Chicago in the mid-1950s, where he gained further influence from studying with pianist Ahmad Jamal and played in the hardbop group MJT + 3, before going on to New York City in 1959. "Chicago gave me the stuff I needed--and the confidence," he recalled in 1987. "New York refined my stuff and it‘s still doing it."

Mabern‘s "stuff" would always be rooted in his Memphis-blues upbringing, his hands-on experience in the 1950s and 60s jazz world, and his steady commitment to growing as a player. One of his earliest significant gigs was an 18-month stay with Art Farmer and Benny Golson‘s Jazztet. After the Jazztet disbanded, Mabern did a brief stint with Miles Davis in 1963, and he also worked with Sonny Rollins and J.J. Johnson, building a reputation as a reliable pianist at home in bluesy, progressive-hardbop settings. He played in a quartet with guitarist Wes Montgomery as well, and a 1965 Paris concert recording gives us a compelling document of the group. Decades later Mabern praised the joyous quality of Montgomery‘s playing and personality and told an interviewer:

The music was challenging. He‘d just start playing. He‘d say "Mabern, play this with me." Now, if he had a specific thing he wanted me to play, like say maybe he wanted me to play a figure with him in unison, ok, and I‘d pick it right up because of the fact that I‘m self taught, always had to use my ears anyway… Then there‘d be times when he‘d say, "Mabern, you play this with me," and it might be the harmony part to what he‘s playing…whatever way, it was always a challenge. He always said, "Mabern, you‘re a bad cat." And I‘d say, "Oh, I‘m just trying to keep up with you."

In the mid-1960s Mabern appeared on a number of dates for gold-standard label Blue Note Records, working with hardbop stars such as Jackie McLean and Lee Morgan-more evidence that his quiet persistence of quality was winning him notice among his peers. Morgan would become a frequent musical associate, and showed up with Mabern as well on saxophonist Hank Mobley's 1965 album Dippin'-the kind of hardbop meeting-of-musical minds that dazzles us today, but which was pretty much par for the course in those times.

Mabern As a Leader

In 1968 Mabern made A Few Miles From Memphis, his first album as a leader, with a lineup that featured two saxophonists, one of them fellow Memphis native George Coleman. Jazz critic Larry Kart praised Mabern‘s writing for the date, citing "To Wane" in particular for the saxophones‘ harmonic shifts, and concluded, "If you are looking for pleasant, danceable music with an occasional solo that will catch your ear, then Mabern is your man."

The end of the 1960s would see a spate of leader-date activity for Mabern on the Prestige label, and his albums generally received good notices, though Downbeat writer Harvey Siders expressed a sentiment that seems to have dogged Mabern from time to time. Reviewing Mabern‘s Workin' and Wailin' album, Siders wrote,

Harold Mabern is one of the most talented paradoxes in jazz: a fine writer, a sensitive, swinging accompanist, and a jazz soloist whose playing shows frequent flashes of brilliance. But as a leader, he doesn‘t make it.

Siders quoted bassist Howard Rumsey‘s remark that "Harold‘s too nice a guy" and knocked the pianist for not being assertive enough. Still, Siders, like Larry Kart, touted Mabern‘s writing as a pleasure to listen to.

As the 1970s began, Harold Mabern became a key member of Lee Morgan‘s working group and appeared on several live and studio recordings made by the trumpeter before his death in 1972. Mabern would stay on the New York scene in his quiet, steady way, extending his musical legacy as a hardbop blues veteran of the 1960s scene-an extension that I‘ll explore in a future Night Lights program.

More About Harold Mabern and Memphis