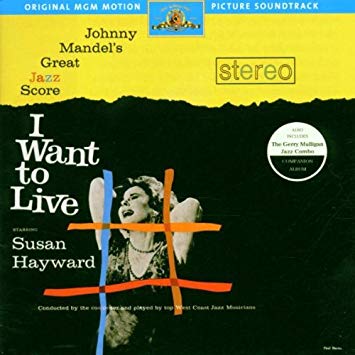 Based on the true story of accused murderess Barbara Graham, the 1958 movie I Want to Live! employed a jazz soundtrack written by Johnny Mandel and performed by such jazz stalwarts as Gerry Mulligan, Bud Shank and Art Farmer (who appeared in the movie's opening scenes), along with Frank Rosolino, Jack Sheldon, and Shelly Manne. Susan Hayward (who met a grisly demise in many of her films from the 1940s and 1950s) played Graham, a woman with a troubled past and a real-life jazz and Gerry Mulligan fan who was eventually executed in 1955, despite her protestations of innocence. (Debate continues today over whether or not she actually committed the murder for which she was convicted.) Hayward won an Academy Award for her performance in the movie, which was directed by Hoosier native Robert Wise (The Day the Earth Stood Still, West Side Story, The Haunting, The Sound of Music) We'll hear music from both versions of the soundtrack that were released, as well as more background on the story behind Barbara Graham and the making of the movie.

Watch the theatrical trailer for I Want to Live!: