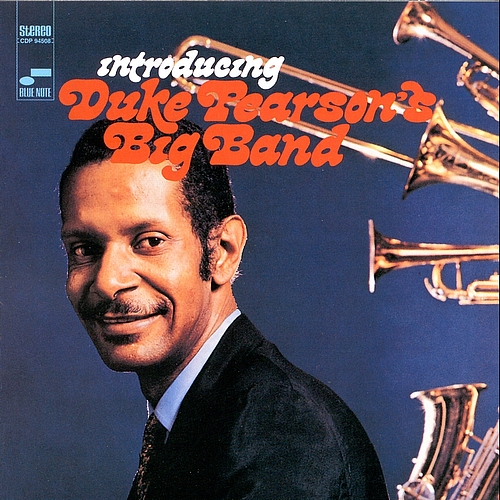 The late 1960s are not usually thought of as a prime time for big bands, but in New York City during those years there were several large ensembles that gained a strong following, and one of them was led by a man who at the same time was serving as the in-house music director for Blue Note Records-pianist, composer and arranger Duke Pearson.

Pearson was born in Atlanta, Georgia in 1932, and gained his "Duke" nickname through his uncle's love of Duke Ellington, reinforced by the enthusiasm that Pearson himself developed for the renowned composer and bandleader's music. Pearson would spend the initial years of his career leading, playing on, and writing for small or mid-sized hardbop group dates, but he told jazz journalist Mark Gardner in the late 1960s that he had always had a burning ambition to lead a big band:

The big bands were my first musical love, and the thrill of hearing 16 or 20 men swinging as one has never lost its great attraction to me."

In 1962 Pearson put together a big band for a performance in his hometown of Atlanta. Two years later he wrote a brass-and-voices album for trumpeter Donald Byrd, a project that sparked his desire to finally lead and write for his own large ensemble. Byrd initially served as a co-leader but eventually withdrew to become involved in academic pursuits. Pearson was able to pull plenty of top-notch East Coast jazz musicians into the band, though, including trumpeters Marvin Stamm, Burt Collins and Randy Brecker, saxophonists Pepper Adams, Frank Foster, and Jerry Dodgion, bassist Bob Cranshaw, and drummer Mickey Roker.

It was a time of renewed vitality for big bands on the New York City scene; trumpeter Thad Jones and drummer Mel Lewis had started up a quickly-acclaimed ensemble, and saxophonist Joe Henderson, bassist Chuck Israels and trumpeters Clark Terry and Howard McGhee were leading new big bands as well. Pearson's band quickly made a name for itself, and his association with Blue Note Records, where he had recorded and served as house music director for much of the 1960s, gave him an opportunity to take his organization into the studio in December 1967. The subsequent album, Introducing Duke Pearson's Big Band, earned raves in DownBeat Magazine, where reviewer Harvey Pekar described his writing as

"forceful and sensitive, full of rich colors and textures. The band he leads on this LP is a disciplined, enthusiastic crew that does his work justice."

though Pearson used some of the same players as Jones-Lewis, his band had a personality of its own: a somewhat more conservative music marked by the leader's distinctive lyricism. "New Girl," with its compact 28-bar theme, is a prime example of Pearson's gifts and shows the band at its best, both in solosâ€¦and in the wonderfully punchy ensemble sections.

Pearson's big band gained a following in New York City and some good press as well, playing at clubs like the Half Note and the Village Vanguard. Pearson sometimes had to turn down jobs because they conflicted with the schedule of Thad Jones and Mel Lewis' big band, which employed some of the same musicians, and he usually had to rehearse on Saturdays-the only day when his band members weren't doing their usual professional studio and TV-show gigs. Running the band itself was pretty much a one-man operation for Pearson; in his 1968 Jazz Journal article about the orchestra, Mark Gardner described a typical day for the leader:

The morning before a gig will find him collecting the band's music stands from a warehouse and ferrying them in his own car to the club. In the afternoon he will work on new arrangements and carry out the chore of repairing with Scotch tape music sheets, all written in his own meticulous hand, that have been ripped or smudged during the night's work. There are the last minute panics to attend to. Trumpeter X will be delayed until the second set because his horn is being repaired and he is trying to borrow one. A saxophonist without transport must be collected. All these distractions before a note has been played. Duke takes it in his stride, riding all the minor crises with a relaxed smile. To be any other way would be a sure short-cut to an ulcer or a nervous breakdown.

In addition to his own compositions, Pearson featured standards and arrangements of other composers' tunes, including the young, up-and-coming pianist Chick Corea, as well as standards from the Great American Songbook.

Down Then Back In Town

A year after recording Introducing Duke Pearson's Big Band, Pearson took his ensemble into the studio for a followup. The album was not released for a year, though, which Pearson said made him "feel terrible." When it finally come out, DownBeat reviewer Chris Albertson was lukewarm in his reception, decrying what he called "a rather obvious disparity between the arrangements and the solos-they are a couple of eras apart, the former being somewhat anachronistic." He compared the band unfavorably to orchestras led by trumpeter Don Ellis and pianist Clare Fischer, saying that they had a better chance of appealing to what he called "today's bobbysoxers-young rock fansâ€¦. Pearson's 17-piece unit, star-studded as it is, falls somewhere betwixt the old and the new, and I cannot see it making any significant waves."

The band also had trouble landing gigs outside of New York City very often, partly because of its' members' employment obligations elsewhere, limiting Pearson's overall market exposure. What kept it going, besides Pearson's own drive, was the love of his musicians for the music that they were playing. "It was something they wanted to do," Pearson said in a 1980 interview. "They made their money in the studio, play anything. But they wanted to play jazz and they wanted that band together and they liked the things I was writing."

The Duke Pearson big band would continue into the beginning of the 1970s, and Pearson also recorded How Insensitive, an album featuring the New York Group Singers' Big Band, an all-vocalist ensemble. In 1971 he took a teaching gig at Clark College and was off the New York City scene for awhile, putting the band on hold, but the following year he reformed it, with many of the same personnel.

In an April 1973 DownBeat article titled "Duke Pearson's Back In Town," writer Leonard Maltin caught up with Pearson at the Half Note, where he was leading a regular Sunday-night gig, and found the leader and his musicians still charged with excitement about the band. "The music just happens," saxophonist Jerry Dodgion told Maltin. "You don't have to force it." Maltin also reported that Pearson was in talks with the Mainstream label to make another record with his orchestra. Nothing ultimately came of that, though, and the band failed to stay together as a working unit.

Multiple-sclerosis would also impose a severe decline on Pearson's ability to pursue all of his musical projects as the 1970s wore on-when Bob Rusch asked him to talk about his big band in a 1980 interview, Pearson answered, "It's different with me now, you knowâ€¦ I'm in a wheelchair, I've got M.S. now." He died at the age of 48 not long after.