Good Vibes: Music For The Final Days Of The Online Fund Drive 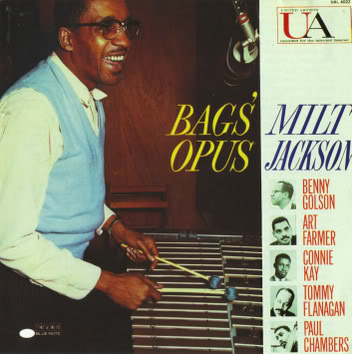 We're in the final days of the Night Lights online fund-drive and still need your support to help us make the goal of $600 by this Saturday. We're almost there...!

if you've enjoyed listening to the wide range of programs in the Night Lights archives that feature artists like Herbie Nichols, guests like award-winning Thelonious Monk biographer Robin D.G. Kelley, and themes like the recent "Fathers and Sons" show, then please consider contributing. Your help helps makes this program possible.

And speaking of programs, here's another: our spring 2010 "Good Vibes" fund-drive show:

A Signature Sound For Vibes

Nothing says "jazz" and "vibes" quite like the name Milt Jackson. Jackson was also known as "Bags," a nickname allegedly given to him for the effects his habit of staying up all night had on his eyes.

One of the key founding members of the Modern Jazz Quartet, Jackson fused the blues, bebop and swing of the 1940s into a signature sound that all subsequent vibraphonists had to deal with, whether they allowed themselves to be influenced by it or rebelled against it in an attempt to find their own stylistic paths.

In The Oxford Companion to Jazz, Neil Tesser writes of Jackson,

He slowed the vibrato and, more important, scaled back the percussive attack and on-the-beat phrasing that often made the vibes sound cartoonish; instead he offered a flowing, relaxed style that took its cue from contemporaneous hornmen rather than pianists and drummers. His lines breathed, lyrically and almost vocally; they sometimes whispered and even sighed.

The next set features two jazz-vibes pioneers. Lionel Hampton actually started out as a drummer. During a 1930 recording session with Louis Armstrong, Hampton started playing around on a vibraphone that had been left in the studio. From there, he went on to become one of the most prominent vibes players of the 20th century.

Hampton would go on to lead a successful, long-running big band, but first he came to prominence as a vibraphonist with Benny Goodmanâ€˜s trio and quartet in the 1930s. Weâ€˜ll hear a small-group date from the 1950s that showcases him on the vibes.

Red Norvo played xylophone in the 1930s before taking up the vibes in the 1940s. We'll hear something from the progressive trio he led with guitarist Tal Farlow and bassist Charles Mingus.

Prophetic Vibes: A Hearse For A Tour Bus

The story of vibraphonist Lem Winchester is one of a promise that ended abruptly just when it had begun to be fulfilled. Winchester was a Delaware policeman who gave up the crime beat for the jazz beat. He signed a contract with Prestigeâ€˜s New Jazz label and recorded four albums in just 13 months, all with top players of the day, including Benny Golson and Oliver Nelson.

Winchesterâ€˜s playing was tinged with much of the hardbop and soul-jazz sounds of the late 1950s and early 1960s. He rapidly developed his own stamp of lyrical vitality thatâ€˜s reflected simply in the title of what would prove to be his final LP: With Feeling. Yet just as his career was starting to take off, Winchester died in a tragic, self-inflicted gun accident in an Indianapolis jazz club. The accident happened on a Friday the 13th; to make matters eerier, Winchester had been using a hearse for a tour bus. He was only 32 years old when he died.

Bobby Hutcherson is a modern giant of jazz vibes. The first major figure on the instrument to follow Milt Jackson, Hutcherson was a vibraphonist whose rhythmic and harmonic conception was well-suited for the adventurous jazz of the 1960s. He recorded a string of masterful albums for the Blue Note label throughout that decade, working with musicians like Jackie McLean, Eric Dolphy, and Andrew Hill to create a moody and subtle but vigorous sound that underscores the excitement and volatility of those times.

The Godfather Of Acid Jazz

If you go to the archives section of the Night Lights website, among the many programs there youâ€˜ll find one about vibraphonist Roy Ayers, who's been called "the godfather of acid jazz." Modern-day hiphoppers refer to him as "The Icon Man," but before his success in the 1970s R&B scene he was renowned by his colleagues for his jazz performances in the '60s. Ayers played with West Coast stalwarts such as pianist Jack Wilson and saxophonist Curtis Amy. He was a member of Gerald Wilsonâ€˜s illustrious big band; as a leader he made records with the likes of saxophonist Joe Henderson, pianist Herbie Hancock, and trumpeter Charles Tolliver.