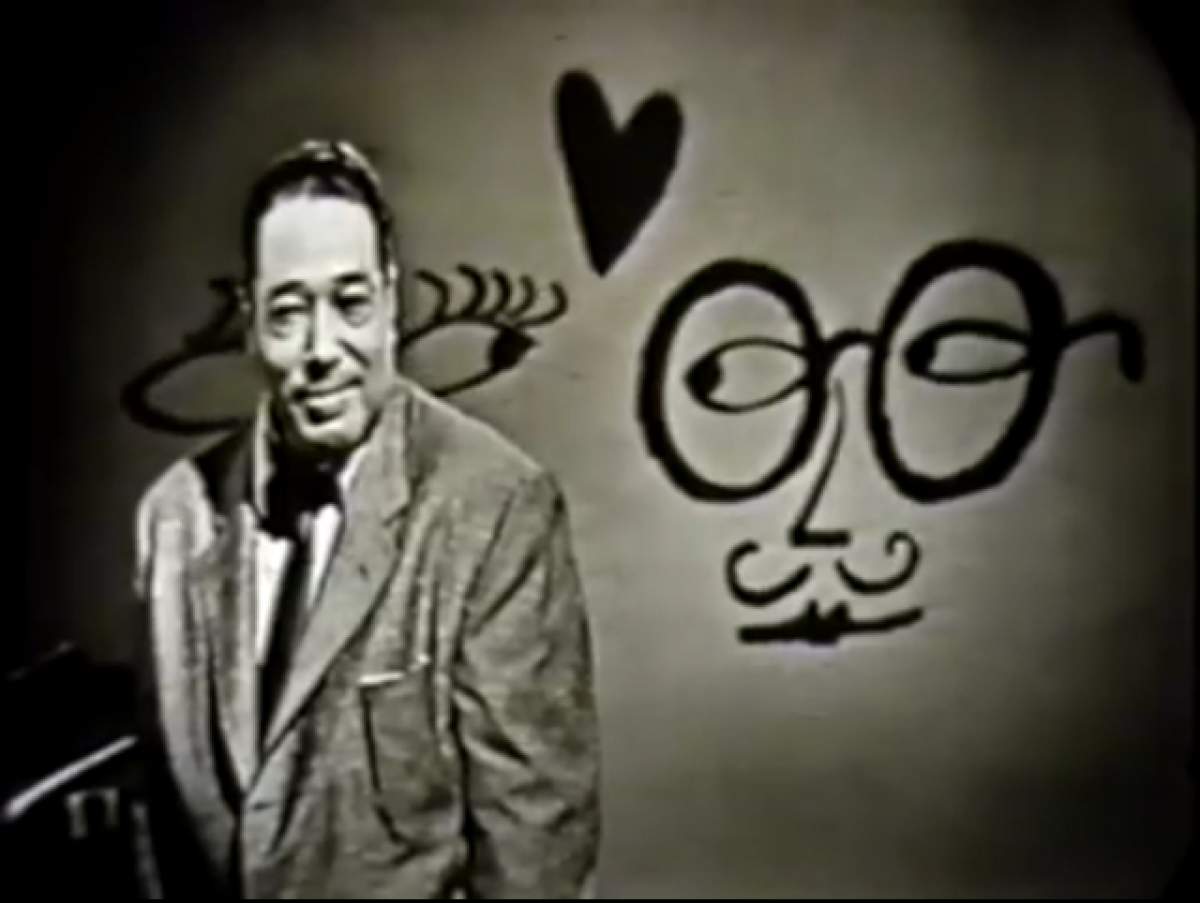 From the department of Saturday-afternoon-discoveries-made-while-researching-something-else comes this interesting convergence of bandleader Duke Ellington with artist Andy Warhol, a few years before Warhol rocketed to fame in the art world. As a bonus, immediately afterwards Ellington performs a duet of his classic composition "Come Sunday" with world-renowned violinist Yehudi Menuhin.

Ellington was at what's historically been considered a career nadir in 1955 when he appeared on Stan Kenton's CBS variety show Music '55 (a summer replacement for Edward R. Murrow's iconic Person To Person program). Warhol had been working in commercial and advertising art since moving to New York City in 1949. According to Klaus Stratemann's invaluable book Duke Ellington: Day By Day And Film By Film, program producer and jazz fan Bob Bach specially commissioned Warhol to do the drawings that scroll by behind Ellington as he recites his urban-hipster fairy-tale "Pretty And The Wolf" (aka "Monologue"). The accompanying Warhol illustrations begin shortly after Ellington's introduction to the piece, starting around the 5:45 mark and ending at 7:50:

Warhol's 1950s visual links to the jazz world have been noted before, but this is the first time that I've come across this particular connection.

If you keep watching, at the conclusion of "Pretty And The Wolf" Ellington welcomes violinist Yehudi Menuhin to the stage, and the two proceed to perform "Come Sunday," Duke's beautiful piece from Black, Brown And Beige. Menuhin seems to have been an exception to the program's jazz-oriented roster of guests that summer, which included Cab Calloway, Ella Fitzgerald, Hoagy Carmichael, Harold Arlen, Count Basie, and the Dave Brubeck Quartet.

There's much more about Ellington's appearance on Music '55 and the program itself in Stratemann's book on pages 357-359, including a note that CBS musical consultant Leonard Feather and several others had originally pitched Ellington to be the program's host. Music '55 failed to do enough ratings or advertising business to be picked up by CBS after its summer run, but you can see the episode above in its entirety, as well as another one on YouTube: