We Brothers Three: The Montgomerys, Joneses And Heaths 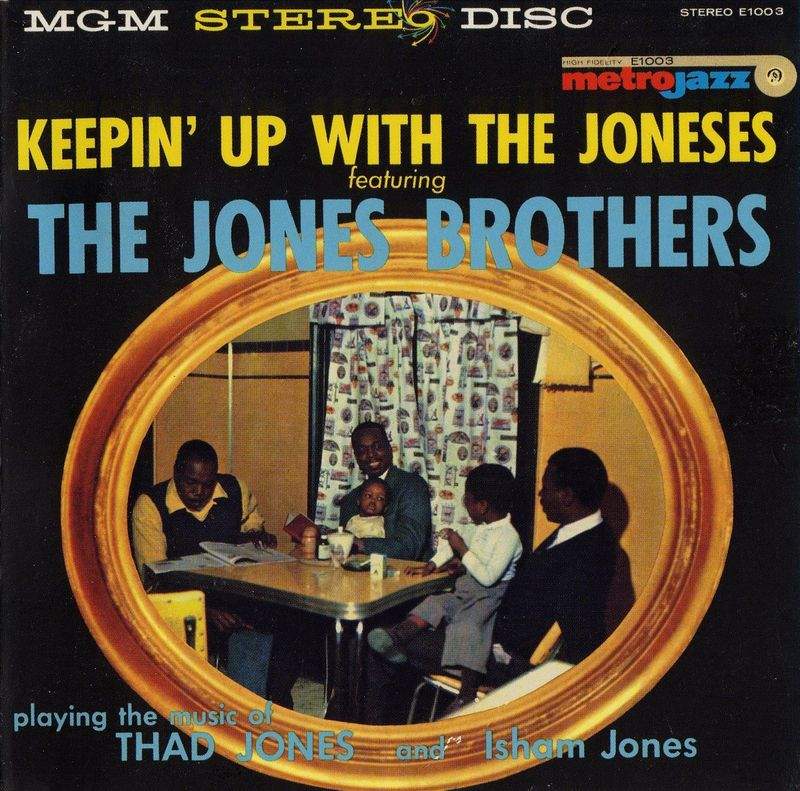 From Tommy and Jimmy Dorsey to Wynton and Branford Marsalis, the history of jazz includes a number of notable brother acts. Sometimes, three brothers have shared the stage or studio space. That's the focus of this week's edition of Night Lights.

Keeping Up With The Joneses

Hank Jones, Elvin Jones and Thad Jones were born in Pontiac, Michigan, Hank in 1918, Thad in 1923 and Elvin in 1927. They were three of ten children in the Jones family.

In the mid-1940s, Hank would go to New York City to become one of the most prolific and respected swing-to-bop pianists in the business. He landed gigs on the Jazz at the Philharmonic tours, and as Ella Fitzgerald's accompanist. Hank continued to play right up to the time of his death in 2010.

Thad would arrive in New York in 1954. He made a name for himself as a trumpeter, composer and arranger in both small groups and big bands, especially with Count Basie's orchestra. Eventually, he went on to lead a renowned orchestra of his own with drummer Mel Lewis.

Elvin joined his brothers in New York in 1956. He grew into one of the most dynamic drummers in the history of jazz. His powerful, poly-rhythmic style came into its own during his time with John Coltrane's classic quartet of the 1960s.

'Each Of Us Had Something To Say'

All in all, the Joneses were an extraordinary musical family. On several occasions, the three brothers recorded together. In 1958, producer and critic Leonard Feather brought the three into the studio for an album called Keepin' Up With the Joneses. Even the bassist on this date was a Jones, Eddie Jones (though he was no relation to the others).

In 1965, the three Jones brothers came together again for a studio recording, the last on which they'd all appear. On the title track of Elvin Jones' album And Then Again, they engaged in an improvisational number that bordered on free jazz - uncommon territory, especially for brothers Hank and Thad.

In 1999 Hank Jones told jazz writer Doug Ramsey that the brothers' paths had rarely crossed, in part a because of how busy all three were as successful professional jazz musicians. He regretted that the three had not recorded together more often, he said. "Each of us, in our own separate ways, had something to say. It would have been good to say it together."

It would be difficult to write a history of modern jazz without including one or all of the Heath brothers. Coming out of Philadelphia in the late-1940s, bassist Percy Heath, the oldest, became a cornerstone of the long-running Modern Jazz Quartet. He was the only bassist to record with both Charlie Parker and Ornette Coleman.

Like his brother, tenor saxophonist Jimmy Heath had made professional strides playing with Dizzy Gillespie. He was also a good friend of the young John Coltrane. Although Jimmy missed much of the 1950s due to drug problems, after he overcame them he made a series of masterful hardbop records for Riverside in the early 1960s. Several of these included his brother Percy, as well as his younger brother, the drummer Albert, or Tootie Heath.

Tootie Heath began recording in 1957 as a leader on John Coltrane's debut LP. He also aided the creation of Playboys, a notable West Coast jazz summit LP that matched Art Pepper and Chet Baker, by smuggling Jimmy Heath's compositions out of prison and giving them to Pepper and Baker for the studio date.

In addition to Jimmy's Riverside records, Tootie would go on to work or record with numerous jazz greats such as Dexter Gordon and J.J. Johnson. In 1975, Jimmy, Percy and Tootie formally formed the Heath Brothers. Under that name, they recorded nine albums together over the next two decades, before Percy Heath passed away in 2005.

The Adderleys would go on to record "Big P" themselves on several occasions. And it was Cannonball Adderley who made a significant contribution to jazz history - in addition to his own playing - with an impassioned suggestion to Riverside Records producer Orrin Keepnews that he sign an incredible guitarist Adderley had just seen in Indianapolis.

The guitarist was Wes Montgomery. Keepnews did indeed sign him, and Montgomery went on to record a series of jazz-guitar masterpieces for Riverside between 1959 and 1963. But Wes Montgomery had been around for years. He'd even gone out on the road with Lionel Hampton's big band, which featured Wes' brother Monk Montgomery on electric bass. Wes and Monk had another talented musician brother, Buddy, who played both piano and vibes. They worked together often in Indianapolis.

Monk and Buddy had already begun to make a name for themselves with their group The Mastersounds, but with Wes' overnight elevation the three decided to work together as the Montgomery Brothers.

They recorded four albums in all, including one with pianist George Shearing, and they made a successful appearance at the 1960 Monterey Jazz Festival. But they did not get as much work as they'd anticipated, and by early 1962 the Brothers disbanded, although Buddy and Monk would back Wes again later on in the decade for dates under his own name.

For More Brothers In Jazz...