Before Broadway: George Benson In The 1960s 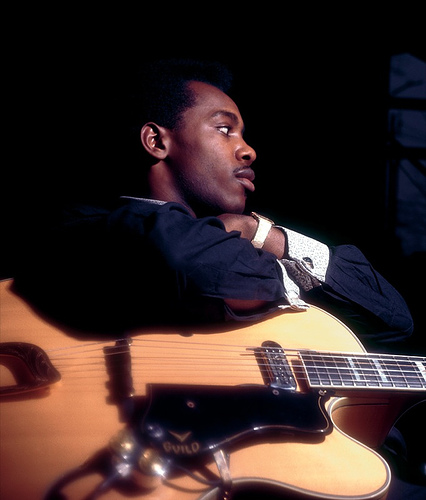 In the 1970s George Benson became a crossover star with vocal hits and a smooth-sounding pop/ R&B style. Years before, though, he'd already established a legacy as a jazz guitarist who brimmed with energy and talent.

A child-prodigy singer from Pittsburgh, George Benson honed his jazz chops on guitar with Brother Jack McDuff's organ combo in the early 1960s, before being signed to Columbia Records by legendary talent scout John Hammond. Albums like The George Benson Cookbook andIt's Uptown are early signposts along the path of Benson's movement beyond his early influences like Charlie Christian and Wes Montgomery. These albums help make the case for a parallel to another performer, as writer Richard Ginnell notes: "Benson is the guitar-playing equivalent of Nat King Cole – a fantastic pianist whose smooth way with a pop vocal eventually eclipsed his instrumental prowess in the marketplace."

Before Broadway features Benson as a leader and with organists McDuff and Jimmy Smith in straightahead, hard-cooking soul-jazz settings from the 1960s. We'll also hear his interpretation of Miles Davis's "So What" from his standout 1971 CTI jazz album Beyond the Blue Horizon. Jazz critic Gary Giddins describes Benson's playing from this era as "lean, [filled with] hungry dissonances, offhanded energy, whistling articulation, and arpeggiated flourishes."