Ask Me Now: Takes on Jazz and Literature 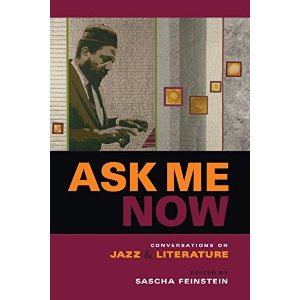 Ever since Louis Armstrong's trumpet sound became a symbol of musical revolution and Bix Beiderbecke died tragically young in a New York City apartment, writers have been responding to jazz and the musicians who make it. In Ask Me Now, a new anthology of interviews conducted by poet and scholar Sascha Feinstein, the relationship between jazz and literature is explored at length in a series of conversations with artists who reflect on the profound emotional and aesthetic connections they've made through listening to, playing, and writing about the music. As author David Jauss writes, "If we want to understand the poetry of our time fully, then we must try to understand why it so often turns to jazz for inspiration."

These interviews originally appeared in the magazine Brilliant Corners, edited by Feinstein (who has also co-edited two anthologies of jazz poetry). The range of interviewees is impressive-prominent jazz writers such as Dan Morgenstern and Gary Giddins, highly lauded black poets such as Amiri Baraka and Pulitzer Prize winner Yusef Komunyakaa, political activist-artists such as John Sinclair, and musicians such as Fred Hersch and Bill Crow. Examples of their work are often included; Komunyakaa's ode to Charlie Parker, "Testimony," is one of several pieces that stand out, a skillfully-rendered extended poem that displays how jazz poetry, a form fraught with potential caricature, can be both moving and musical without succumbing to an internal sense of juiced-up drama. (Invoking the name of a jazz icon does not automatically confer the power of said icon's music upon the poem.)

Feinstein's gracious, respectful-but-at-ease approach serves him well across the broad swath of these interviews-overcoming a certain distance, for example, that one senses in poet Jayne Cortez. His own poet's and jazz-lover's ear leads to many signal moments in Ask Me Now, such as his quotation of writer Al Young: "Essence in this instance is private song, is you hearing your secret sorrow and joy blown back through Coleman Hawkins, invisibly connected to you and played back through countless bodies, each one an embodiment of the same soul force." These elegantly casual investigations of myth, memory and music are ultimately informed by a shared reverence for the jazz artists who inspired them. "I work hard at the jazz poems I write," David Jauss tells Feinstein, "because I feel part of the impulse behind them is to honor the people who made this great art and who have not gotten the recognition that they deserve." A noble aim, a complicated business; Ask Me Now poses its questions and its myriad of possible answers with an improvisational grace.