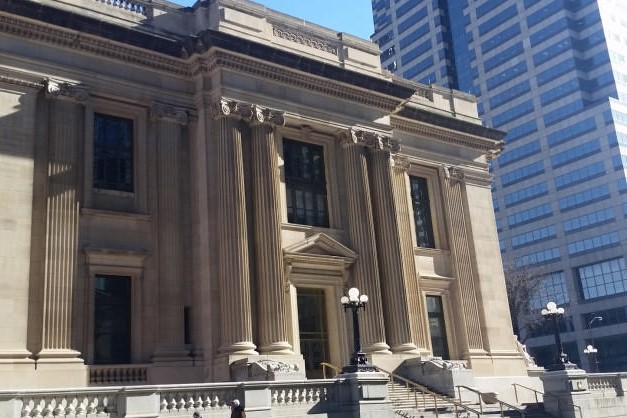 USA Gymnastics filed for Chapter 11 bankruptcy last month, in an attempt to survive dozens of lawsuits across the country. (Lauren Chapman/IPB News)

Only a few people were in the courtroom Wednesday afternoon as lawyers involved in the USA Gymnastics bankruptcy case phoned in to a scheduled hearing.

USA Gymnastics wants to give 40 employees of the organization bonuses in the amount of either $1,000 or $5,000. The supplemental motion asks the court judge for approval to spend $88,000 on holiday bonuses for employees.

“The debtor, the business, has to provide assurances to its employees that it’s going to continue to survive and to pay them,” says Fohey. “Because it’s understandably difficult to keep employees, particularly management, if the business is in bankruptcy.”

However, investigations into USAG employee Amy White and her alleged involvement in the cover-up of Larry Nassar’s sexual abuses have raised concerns about who exactly would receive the extra cash.

Lawyer James Stang of law firm Pachulski Stang Ziehl & Jones is a part of the creditor committee and represents the council for the sexual abuse survivors. He says he has no problem with the bonuses as long as the employees receiving them aren’t connected to the lawsuits.

Fohey says this request is the only thing different compared to other bankruptcy claims.

“In terms of what the judge will do, it’s hard to know,” says Fohey. “Though having bonuses paid to people that were tied up in the problems that led to the bankruptcy might raise significant questions for any judge just as it has among the public who saw these bonus requests coming up.”

The supplemental motion is scheduled to be addressed again in a hearing on Feb. 25.