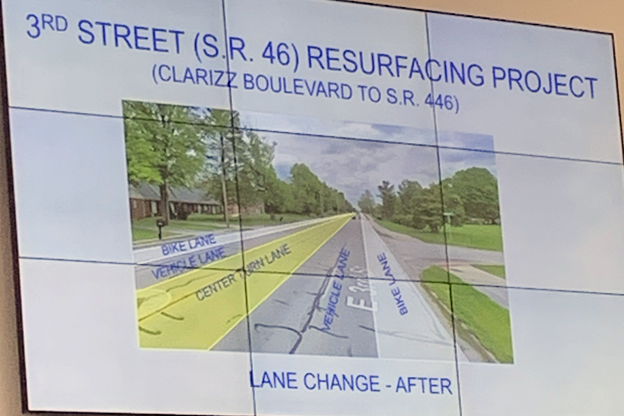 Longtime Bloomington resident David Ellies finds the city’s east side road projects have made getting around town more difficult. Ellies asked WFIU about two specific projects: the recent reduction of East Third Street from four lanes to two, and the work currently being done at the intersection of Moore’s Pike, College Mall Road, and Sare Road.

“Who instigated this? I'd like them to explain to me what they're trying to accomplish,” Ellies said.

Ellies said the lane reduction on East Third around Clarizz Boulevard didn’t make sense to him, given the volume of traffic at certain times of day. He wondered if the city was prioritizing bike lanes over vehicular traffic.

City Engineer Andrew Cibor said the roadwork started as a resurfacing project by the Indiana Department of Transportation (INDOT), but that the City of Bloomington worked together with the state to assess how East Third Street would function best.

“The intent from my prospective, the changes to East Third were to improve the safety, not necessarily to provide bike lanes,” Cibor said.

But Ellies noticed that, though drivers are notified the lanes are ending, many drivers don’t merge well and that makes conditions less safe.

“People are notified a little in advance that the lane is going to end at Clarizz Boulevard but people ignore that, and they’re flying up the right lane and when they get to that intersection they want to cut you off to get into your lane because that lane’s ending,” Ellies said.

Individual driving habits aside, Cibor said research from across the U.S. shows that reducing four-lane roads to two lanes can reduce crashes by as much as 50%.

The actual road width, though, isn’t any narrower than it was before, Cibor added, and the center lane provides more ease for emergency vehicles to navigate traffic.

Cibor said Ellies is correct, but the situation isn’t permanent.

“Both directions will have left turn arrows when the project is complete. What he’s seeing now is just a temporary condition while construction is underway,” Cibor said.

Cibor said the work being done at that intersection is both a safety improvement project and a maintenance project, since the older traffic signal infrastructure was out of date.

"I remember before we started this project some of the signal poles were starting to lean so it was time to replace and upgrade that intersection,” Cibor said.

Cibor expects that by April 1st, all lanes of traffic will be opened, and the intersection will function as it had before - only safer and friendlier to all users.

On the other side of Bloomington, West 17th Street has been a work in progress for several years and was affected by the construction of I-69. Replacing the Vernal Pike exit with a bridge overpass on 17th tied up that end of the street before the city even began its projects in 2019.

Jim Johnson works at IU but lives west of I-69. He said he was looking for ways to get home but became frustrated because 17th Street was the most direct route but was not fully accessible.

“The timeline, it just seemed nonsensical. They had both ends done, but the middle… I mean, I just couldn’t fathom what was taking that long,” Johnson said.

Cibor said the city’s work modernized the road to better serve the increased demand created by the construction of I-69, including improving the stormwater infrastructure, providing a multiuse path on the north side of the street and a sidewalk on the south side. But there were unforeseen obstacles, such as a lot more rock removal than expected.

Contractors also had to work around multiple utilities relocations. Then, the city discovered the new retaining wall hadn’t been built to plan.

“It’s not like once they discovered there was an issue, the next day they could go out and fix it. It required a lot of evaluation, redesign and critical thinking,” Cibor said.

Cibor said the city is generally happy with how 17th Street turned out, calling the work “transformative” for walkers, cyclist and drivers alike.

The City of Bloomington has more projects slated for the 17th Street area that could be under construction next year and impacting traffic.

One project under design will extend the northern terminus of the B-Line trail to 17th at Crescent Drive.

Another would fill gaps in the 17th Street multipurpose path, specifically that portion between Arlington Road and the IU Stadium, and modernize an older signal at Kinser Pike and 17th.

There’s also a large, primarily residential development planned for a large parcel of land bordered by 17th Street and Arlington Road. Cibor predicts that Trinitas development will impact traffic as some new road connections are built.

Farther east, the city currently is accepting bids for a project to reconstruct the intersection of 17th Street and Dunn Street, which will require another full closure, probably this summer.

At Moore’s Pike and Smith Road, the city plans to create a pedestrian crossing this year.