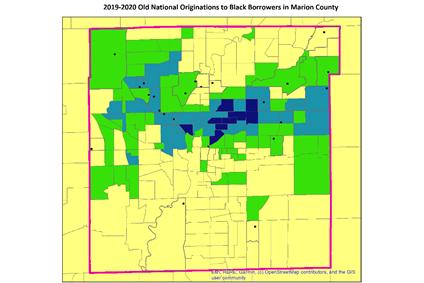 (photo provided by the Fair Housing Center of Central Indiana)

A federal fair lending complaint has been filed against Old National Bank that claims it is engaged in discriminatory practices.

“For whatever reason, Old National Bank has not done it’s due diligence in making sure that it is compliant on fair lending laws and that it is reaching all home seekers,” Nelson said.

The investigation finds Old National made more than 2,250 mortgage loans over a two year period with only 37 going to Black borrowers. Those numbers are much lower than similar lenders.

Old National is currently in the process of acquiring a banking group from Michigan.  The FHCCI has asked the Federal Reserve to review this request before allowing the merger.

“Given that these concerns are occurring, we don’t want another situation where they purchase another bank and still don’t meet the fair lending requirements,” Nelson said.

FHCCI and other lending advocates have raised concerns in light of these allegations.

In a written statement, Old National denies the claims and said it is committed to engaging in fair and equal lending practices.