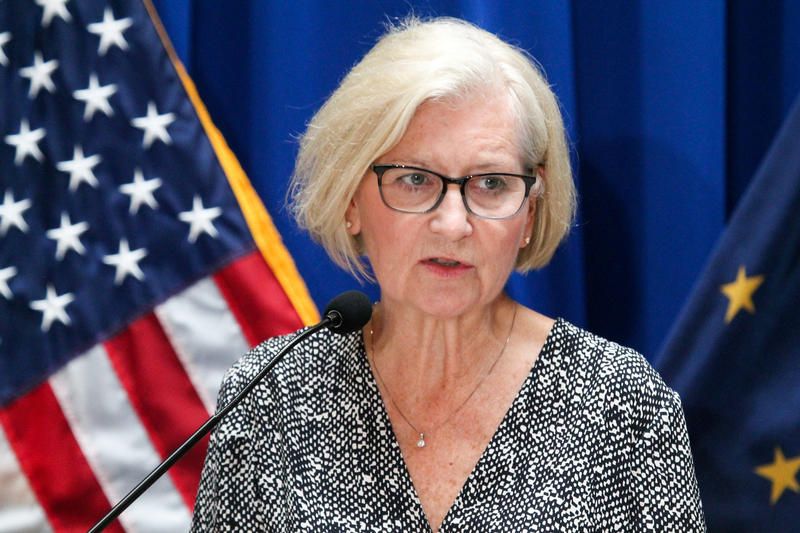 Dr. Kristina Box, the state health commissioner, said Wednesday that Indiana’s hospital system remained stressed even though the steep surges in COVID-19 illnesses, hospitalizations and deaths since late July have declined slightly over the past couple weeks.

Box spoke at a drive-thru clinic near the Indianapolis Motor Speedway that is one of the sites around the state where the health department is offering free COVID-19 and flu vaccinations and COVID-19 testing.

Indiana has the country’s 14th lowest rate of people who are fully vaccinated, at 48.3%, according to the Centers for Disease Control and Prevention. In comparison, the national average rate is 55.8% and the country's highest rate, Vermont's, is 69.4%.

Box said Indiana’s COVID-19 hospitalizations and deaths could rise again as they did during last winter's major surge, and she urged more people to get vaccinated.

“I do have some concerns about that, that this bleed off with COVID vaccines and the political nature that has surrounded that will then bleed off into other childhood vaccines and influenza vaccines that people tend to get on a yearly basis,” Box said.

Indiana hospitals were treating about 2,100 COVID-19 patients as of Tuesday, according to the state health department. That was about 20% fewer than two weeks ago but still five times more than the number in early July, before the latest surge fueled by the more contagious delta variant.

The state’s rolling seven-day average of daily COVID-19 deaths has declined to about 30, after being more than 40 a couple weeks ago. The death rate is far below the December peak of more than 100, although Indiana was averaging fewer than five daily deaths as recently as mid-July. The state has recorded at least 15,625 confirmed or probable coronavirus-related deaths since the start of the pandemic.

Indiana hospitals have been treating more patients, overall, as of late than it did at any time during 2019 or 2020, as patients are receiving necessary medical procedures such as cancer care and orthopedic surgeries that were delayed because of the pandemic, Box said.

The Indiana National Guard has sent four teams, each consisting of four medics and six general support staffers, to assist hospitals that face staffing crunches. Those include Ascension St. Vincent Hospital in Indianapolis, Deaconess Hospital in Evansville, Jeffersonville’s Clark Memorial Hospital, and the Methodist Hospital campuses in Gary and Merrillville.

Despite the recent improving COVID-19 trends, Box said “the virus is not done with us yet” but she hoped not to see another significant winter surge.

“We will see times where this will elevate and go back down,” Box said. “It will be kind of that waveform that other states have seen and so it is not the time to drop our guard, to stop the mitigation measures that we know are working like masking in schools and other places.”