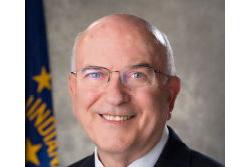 An Indiana state senator who spent 10 days in a hospital’s intensive care unit with COVID-19 says he stands behind his decision to not get vaccinated against the illness.

Republican Sen. Dennis Kruse, of Auburn, said he began experiencing body aches and uncontrollable shaking in early September about the time his wife was admitted to a Fort Wayne hospital with pain from her bone cancer.

The 75-year-old Kruse told The (Fort Wayne) Journal Gazette that several days later a physician friend took him to the hospital, where he was treated until returning home Sept. 27 having lost 20 pounds. His wife also tested positive for COVID-19 but didn’t become ill, Kruse said.

Kruse is among the most conservative members of the Indiana Legislature and announced in August he wouldn’t seek re-election next year, ending more than three decades as a lawmaker.

Kruse said he believed God spared his life and he hasn’t changed his mind about COVID-19 vaccinations, which health experts say are the best way to avoid serious illness.

“I chose to not do that. I don’t think it’s necessary,” Kruse said. “I believe in natural herd immunity. Let it take its course and move on.”

Kruse said he would likely file a bill during next year’s legislative session that would limit employer vaccine mandates.