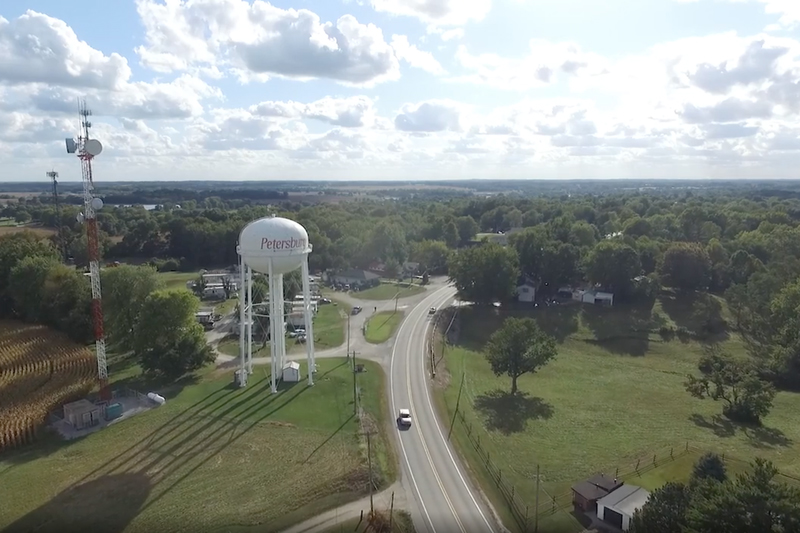 IPL expects to lay off more than 100 workers when it closes down two of Petersburg's four coal units in 2023. (Alan Mbathi/IPB News)

Within the next decade, nine coal plants in Indiana are expected to close or partially shut down. While that may mean cleaner air, it can also have repercussions for the towns that host these plants. In the first in our two-part series, we look at how the transition away from coal could play out in the southern Indiana town of Petersburg.

In Petersburg, Indianapolis Power & Light is everywhere. You can see its logo on everything from the high school scoreboard to an adopt-a-highway sign. Almost everyone who lives in the town of less than 3,000 people seems to be connected to the plant in one way or another.

Tara Mullis is no exception. She owns The CaddyShack restaurant — a small, homestyle diner made out of her grandparents’ old storage barn.

She said about half of her customers work at the coal plant. IPL expects to lay off more than 100 workers when it closes down two of four coal units there in 2023.

"That makes up a lot of our community. And you know, if they're not bringing in income, and they're not spending income either. So, yeah, it's worrisome," Mullis said.

But what really worries Mullis is what will happen if the plant ever shuts down completely. Her husband is a coal miner and the plant purchases Indiana coal.

"If they don't have places to burn coal that buy their coal to burn coal for energy. I mean, it's a downward spiral. I mean, he may not have a job either," Mullis said.

It’s not just plant workers and businesses that stand to suffer from the partial closure, however. Schools could also take a hit.

IPL is Pike County’s largest taxpayer and a little less than half of those taxes go to the district. When the utility shifted some of its assets away from the Petersburg plant last year, the district lost about $300,000. Pike County Schools Superintendent Suzanne Blake said the school corporation also gets about $6,000 per student.

"If we don't reestablish either industry or business or a reason to draw families to this community, then they're going to locate elsewhere," she said.

Attracting new businesses has been top-of-mind for the Pike County Economic Development Corporation. Executive director Ashley Willis said the county has made some sites “shovel-ready” for industrial companies and helped fund a technology center.

It also recently welcomed a new solar farm — which Willis expects will offset a third of the revenue that was lost last year.

"Trying to get the next industries in here so that you know, we're not playing catch up and we don't fall behind. We want to transform and evolve as the trends do," she said.

Blake said Pike County Schools is also doing what it can to attract industry by teaching the next generation of workers technical skills while they’re still in high school.

Kevin Carter teaches welding to juniors and seniors from five high schools in the area. The classes are popular — there are more than 30 students enrolled this year. Carter said a lot of kids in Pike County grow up wanting to work at the coal plant — it’s been seen as a high-paying, reliable job. He hopes his classes will open up multiple job opportunities for his students.

"I mean, a skilled trade you can take and parlay into a lot of other jobs. I mean, you might be a welder at a coal mine or a power plant, but you could also maybe manufacture or do welding at like a Toyota or some other manufacturing facility," Carter said.

That idea appeals to senior Hunter Russell, who wants to be a mechanical engineer. He and his parents were all born and raised in Pike County — and he says he hopes to stay there.

"Once I get to college, I've thought maybe traveling around a little bit, but I'm always probably gonna be a homebody. I like it around here," Russell said.

Courtney Arango is the manager of external communications for Indianapolis Power & Light. She said though the Petersburg coal plant will have a partial shut down in three years, IPL hasn’t set a date to retire the plant completely.

Like many Indiana utilities, Arango said the company decided to close the two units for economic reasons. Natural gas prices are low and renewable energy sources are becoming more affordable. Arango said IPL has been transparent about its decision with workers at the Petersburg plant.

“We know this impacts them and their families and that it creates uncertainty for people. And so we have made promises to them that we will manage the transition in a way that provides opportunity for a variety of people wherever they are in their career journey,” she said.

Arango said some workers are nearing retirement. For others, she said IPL is looking into what it would mean to retrain workers for other jobs. For example, Arango said one worker at a coal plant in Ohio was trained to operate a drone — which can be useful after something like a tornado.

“Rather than send people up poles or in maybe unsafe situations, we'll use drone footage to assess the extent of the damage. And then our engineers and the operators will identify how's the safest and fastest way to replace the equipment and the infrastructure so that we can get power on as quickly as possible,” she said.

While the state works to figure out how Indiana should transition away from coal, locals hope they’ll have enough time to make sure this small city doesn’t turn into a ghost town.

CORRECTION: In the original version of this story, Superintendent Suzanne Blake confirmed with our reporter Pike County Schools closed its smallest elementary school because of IPL shifting its assets away from its Petersburg coal plant. That was incorrect. After publication, Blake said the school actually closed due to other factors and prior to IPL’s asset shift.

This story is part one of our two-part series on the effect of coal plant closures in the state.