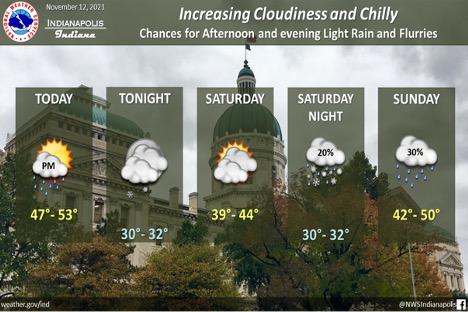 (Courtesy of the National Weather Service)

Temperatures will experience a dip through this weekend, as today’s highs in the lower 50s drift to the lower 40s tomorrow, lasting through Monday, and then springing back into the mid-to-upper 50s on Tuesday. Wednesday temperatures may breach the lower 60s, but will likely return to the 50s on Thursday.

Low temperatures are dropping. It’s expected to get down to 32 degrees tonight, into the upper 20s Sunday night, before returning to the 40s by Monday..

Today, sunny skies will be interrupted by increasing clouds later this afternoon as scattered showers are possible this evening and into tomorrow morning. Mostly to partly cloudy skies are forecast through Sunday night, with another chance of showers, and maybe even sprinkles of snow, early Sunday morning, although most, if any, traces will be erased shortly after sunrise.

Looking further into the forecast, Monday and Tuesday will be mostly sunny, before rain chances return once again Wednesday and Thursday. Due to the relatively higher temperatures, no snow is anticipated in this later rain event. Less than half an inch of precipitation is expected for the next five days.

In the NWS October Summary, October ranked the 4th wettest on record in Indianapolis. The average rainfall in October is 3.2 inches. Total rainfall recorded this October at the Indianapolis International Airport was 7.7 inches. The Bloomington and Muncie areas received 2 inches above average, and Lafayette had more than 6 inches above normal precipitation.