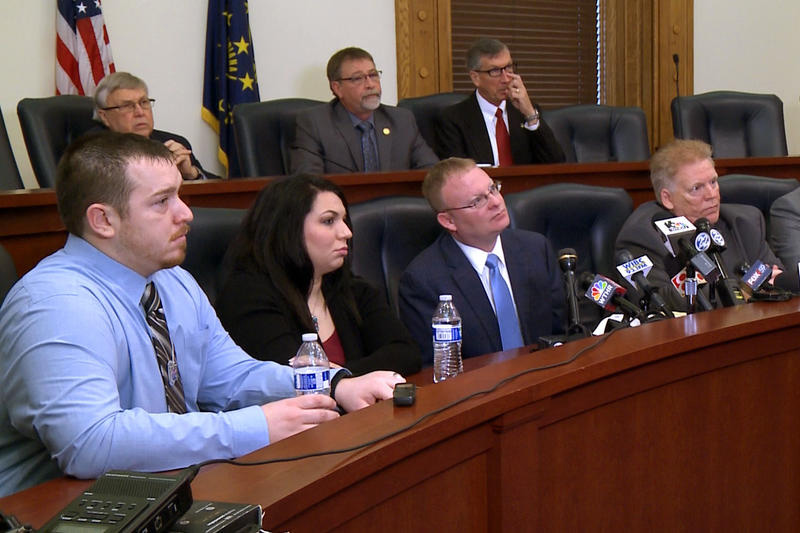 A group of lawmakers joined Shane and Brittany Ingle and Michael Schwab, the family of the three children killed October, at a meeting Tuesday to announce and advocate for bus safety-focused legislation. (Tyler Lake, WFIU/WTIU News)

Family members of three students who were struck and killed on their way to a bus stop in October joined legislators Tuesday to call for better school bus safety across the state.

Under the proposal, penalties for drivers who violate school bus passing laws would increase. For example, a driver who “recklessly passes” a bus with its stop arm out and injures someone, could be charged with a Level 6 felony.

Grandfather of the three children struck and killed in October, Michael Schwab says it should be treated as seriously as drunk driving.

“In my eyes, this offense is on a par with DUI,” he says.

The driver of the vehicle that killed the children told police she didn’t know the stopped vehicle was a school bus. Schwab says, especially in situations when people get hurt, the driver should also lose their privileges until an investigation can be completed.

“We should suspend licenses until the entire event is completed and we understand why it happened.”

The bill would also limit school bus stops on U.S. or state routes so kids don’t have to cross busy streets unless no alternative option is available. The proposal would also require schools to review and submit their bus policies to the state annually.

Sen. Randy Head (R-Logansport), who filed the bill, says several other lawmakers have shown their support, and more changes to the legislation are likely. Those include Rep. Jim Pressel (R-Rolling Prairie)’s proposal to equip school buses with stop arm cameras, and measures to improve awareness among Hoosier drivers about bus passing laws.