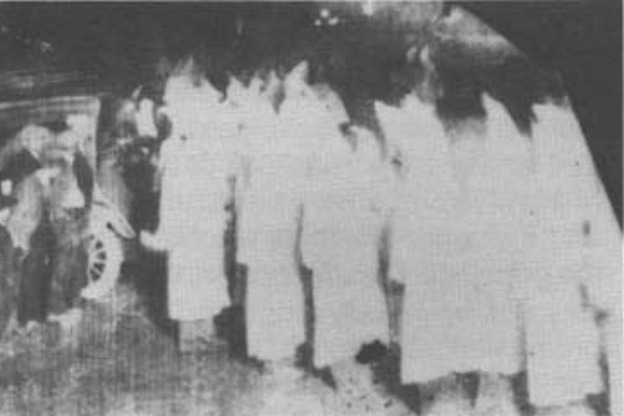 The Ku Klux Klan persecuted Indiana's Catholics, among other groups, during the 1920s.

Until he wrote a memoir, seven decades after the events, William Clayton Wilkinson Jr. “never really discussed the incidents with anyone”. In the summer of 1924, as a ten-year-old boy growing up in the northern Indiana town of North Judson, Wilkinson had been an eyewitness to violence, vicious protest, and acts of intimidation by members of the local Ku Klux Klan.

Wilkinson recalled playing with his friends on the rail lines that connected North Judson to Chicago and brought to the area many immigrants hoping for new jobs. He remembered that the new arrivals brought much-needed business to the town’s stores and service providers, and that many also brought their Catholic faith. Wilkinson, also raised as a Catholic, was soon to find out that those immigrants roused a reaction in the local Klan, an organization that was at its height in Indiana in the early 1920s.

The summer’s first act of intimidation occurred next to the local Catholic convent, where a cross was burned “in the dead of night,” its blackened timbers remaining several days “as a stern reminder of law and order Klan style.” Perhaps Wilkinson’s most vivid memory came from the evening of July 24th, when “Klansmen marched down Main and Lane Streets in a show of intimidation against North Judson’s Catholic residents.” “I remember,” Wilkinson wrote, “companies of marchers in white robes topped with conical white hats and masks that covered their faces . . . preceded by numbers of similarly costumed members mounted on horses. Many were carrying flaming torches”.

Five days later on July 29th, the sound of breaking glass woke Father Van Rie, the local Catholic priest, and his housekeeper Mary McNeal. She looked out the door just as someone threw a dynamite bomb onto the front porch. Every window on the front of the house was destroyed and the front doors “were blown completely off their hinges.” McNeal was cut and badly bruised but the priest, who was “the likely target,” was unhurt. Wilkinson also recalled that several weeks later vandals damaged the stonework at the entrance of the local Catholic church, Saints Cyril and Methodius. He remembered attending morning mass feeling “that I was walking through a battlefield” with broken stone and concrete strewn across his path.

Looking back on that boyhood summer, Wilkinson wrote that “as a ten-year-old boy I knew then, just as I know now” that the Klan’s actions were “directed at me and at all of the Catholics in my community”. Within a few years, the Klan would lose much of its membership and its influence would wane, but the victims of its campaigns of intimidation and violence would remember.