George McCutcheon's obituary in The New York Times placed him in the “Indiana school of romantic literature,” noting the “innocent happiness” he had imparted. 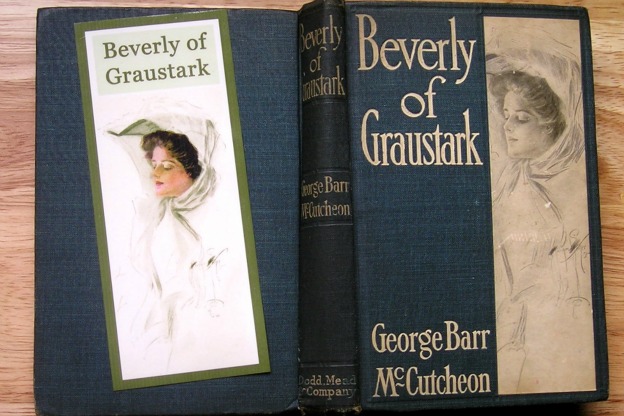 1905 edition of Beverly of Graustark

George Barr McCutcheon was born on a farm in Tippecanoe County, Indiana, in 1866, the eldest of three brothers. Later in his childhood, the family moved to the town of Lafayette, and all three young men attended Purdue University. Ben and John both pursued careers in journalism—Ben was a daily columnist and later an editor for The Chicago Tribune; John also worked for the Tribune and was a Pulitzer-Prize winning political cartoonist. George began his adult life in journalism, but soon switched to writing novels, and his popular, romanticized style soon made him a bestselling author across the nation.

In 1901, George’s first successful book appeared in print. Graustark: The Story of a Love Behind a Throne opens on an east-bound train from Denver, with the dashing young American Grenfall Lorry meeting a divinely beautiful young woman who has disguised herself as Miss Guggenslocker, the daughter of a sausage maker. Through hundreds of pages of adventures, readers learn that the woman is in truth Princess Yetive, of the small European country of Graustark, and they travel with the hero and heroine to the charming capital city of Edelweiss where after almost 500 pages of intrigue, the lovers are able to marry.

McCutcheon received only a $500 fee for his work, but his publisher’s profits were more than a quarter of a million dollars for the best-selling book. George went on to write nearly 50 more books, with author royalties. He visited Graustark twice more, once in 1904 with Beverly of Graustark about a plucky young American woman who becomes involved in various intrigues, and again in 1914 with The Prince of Graustark.

McCutcheon’s novels were light, popular fiction, but as a reader and collector he had a taste for famous American and British authors. In 1926, his rare book collection went up for auction in New York City and over a two day period, collectors bid on first editions of works by Charles Dickens, Robert Louis Stevenson, Rudyard Kipling, and Thomas Hardy. The highlight of the sale was an original uncut set of The Posthumous Papers of the Pickwick Club which brought the then-record price of $7000.

McCutcheon died two years later. His obituary in The New York Times was complimentary but gently condescending, placing him in the “Indiana school of romantic literature” and noting the “innocent happiness” he had given to his readers, among them “college boys, kitchen-maids, and daughters of millionaires.”