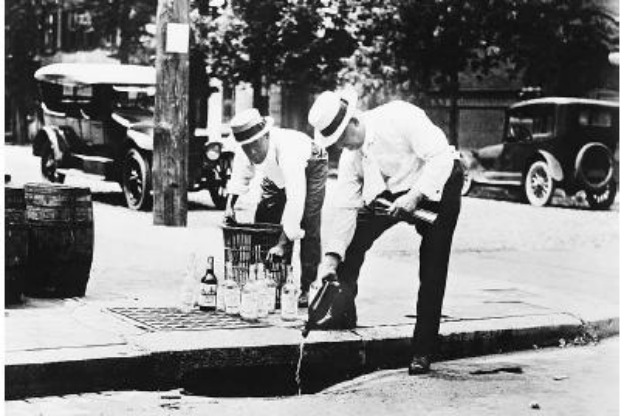 But merely outlawing the use and possession of alcohol was not enough for the Indiana branch of the Anti-Saloon League.

Indiana had its own Prohibition law on the books before temperance became the law of the land with the ratification of the Eighteenth Amendment in 1919 and the passage of the Volstead Act.

But merely outlawing the use and possession of alcohol was not enough for the Indiana branch of the Anti-Saloon League—in 1925, thanks in large part to the lobbying efforts of the League’s influential leader, the Rev. Edward S. Shumaker, the General Assembly passed one of the toughest Prohibition laws in the nation, the Wright “Bone Dry” Law.

One of the ways in which Indiana’s law was much stricter than the Volstead Act involved the issue of medicinal alcohol. The federal law allowed people to legally possess liquor with a doctor’s prescription–as much as a pint of whiskey every ten days. Doctors received special prescription pads from government Prohibition commissioners, and patients took the prescriptions to drugstores, where they received the liquor.

Whiskey and brandy were the most commonly prescribed tonics, even as physicians debated their efficacy. Doctors prescribed these remedies for conditions ranging from anemia to heart disease to pneumonia, and for patients of all ages—even for children.

Indiana’s “bone dry” law outlawed the possession of all liquor—even for medicinal purposes.

But events would take a strange twist after the law’s passage.

Indiana’s chief law enforcement officer, Attorney General Arthur Gilliom, publicly announced in 1927 that when three of his sons had been seriously ill with typhoid and pneumonia, he had procured medicinal whiskey as a last resort to save their lives at a doctor’s urging. Gilliom’s sons lived, and the attorney general was now publicly lobbying for a change in the state’s laws to allow for the prescription and use of medicinal alcohol.

Gilliom then divulged another shocking piece of information: Governor Ed Jackson had recently approached him for help in obtaining prescription whiskey when his wife was suffering from a severe case of pneumonia, and the attorney general had complied. These revelations led to intense debate among Hoosiers—was the law too strict? Should the governor and attorney general face criminal penalties for their actions?

Reverend Shumaker of the Indiana Anti-Saloon League was among those who roundly and publicly condemned the attorney general for violating the law. Shumaker insisted that Gilliom resign for breaking the law not once, but twice.

Yet it soon became apparent that Shumaker himself, the most well-known temperance crusader in the state, also imbibed. A newspaper reporter, Eugene (“Jep”) Jepson Cadou, exposed Shumaker’s daily use of an elixir called Busho Tonic, which contained 23% alcohol. Other newspaper reports mentioned the possibility that Shumaker had obtained liquor several years earlier for his first wife, Lena, and more recently for his son, when they were quite ill.

Revelations such as these surely did not help the cause of Prohibition. Americans voted to repeal Prohibition in 1933, but the great failed social experiment of the last century still fascinates us today.

IMH Source article: Ann Gilliom Verbeek, “The League and the Law: Arthur L. Gilliom and the Problem of Due Process in Prohibition-Era Indiana,” Indiana Magazine of History 107, no. 4 (December 2011).