The Perils Of Pioneer Publishing

One early publisher apologized, “Want of paper compels me to furnish my readers with but half a sheet. I expect a supply before another publication day.” 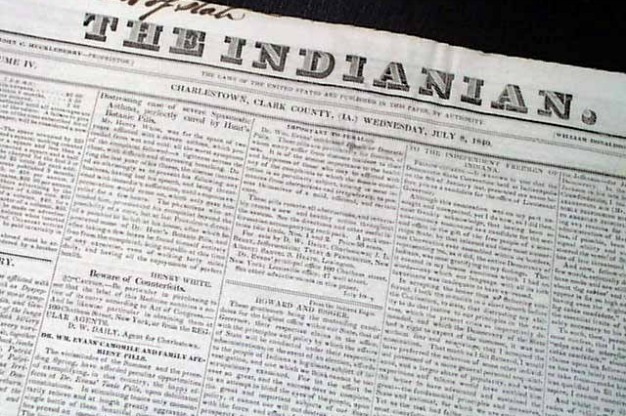 Paper shortages and mail delays were among the obstacles to early newspaper publishing in Indiana.

The only man publishing a newspaper in a territory soon to become a state—and in the territorial capital amidst vicious political infighting and a war—will probably be remembered by history. And so, many historians of early Indiana know the name of Elihu Stout, the first man to print a newspaper in Vincennes, Indiana, beginning in 1804. Stout’s Indiana Gazette was followed by his better-known Western Sun in 1807, after an 1806 fire destroyed the first office and printing press and Stout had to travel to Kentucky to find a new press and supplies.

Less famous are the other early printer/publishers—in Madison, Corydon, Jeffersonville, and seven other early southern Indiana towns— where the first newspapers appeared between 1810 and 1820. By 1830, fifteen more Hoosier towns enjoyed a weekly paper. Most of these efforts scarcely compared with the newspapers being printed in cities and towns in the East. Printing presses and equipment did not travel easily through the western wilderness and were expensive to acquire.

Paper shortages were a particular challenge. Kentucky and Ohio both could claim a few early paper mills, but the first in Indiana did not appear until 1826. Even though most early Indiana newspapers were published weekly and comprised only one large folded sheet—four pages, front and back—sometimes a late paper delivery caused havoc. In one May 1829 issue, Elihu Stout was forced to notify customers that “Want of paper compels me to furnish my readers with but half a sheet. I expect a supply before another publication day.”

Delays and general slowness in mail delivery could also cause grief to newspaper printers. Local government news, an editorial or two, and advertisements filled a good deal of space, but readers also clamored for news from other parts of their state, from the rest of the country, and from Europe. Indiana editors were heavily reliant on the newspapers which arrived from Ohio, Pennsylvania, and all parts east and south. One desperate editor in Lawrenceburg wrote in 1833: “No letters or papers by the last Indianapolis mail. We understand, however, by travelers, that the bank bill is pending.”

The frontier economy also challenged printers who were trying to make a living and at least a modicum of profit. The smaller the town, the more likely newspaper subscriptions might be paid off in barter rather than in cash. In late October 1838, the publisher of the Bloomington Post wrote that “Pork, flour, corn, and meal will be taken at the market price.” He added a more urgent request: “Also those who expect to pay us in firewood must do so immediately—we must have our wood laid in for the winter before the roads get bad.”

Sources: Mary Alden Walker, The Beginnings of Printing in the State of Indiana (1934); “The Early Newspapers of Indiana,” Indiana Magazine of History 2 (September 1906).