A Motorcade Fit For A Prince

The trip from Indianapolis to Lafayette in 1904 took four and a half hours of driving time, not considering numerous stops for cooling and tire changing. 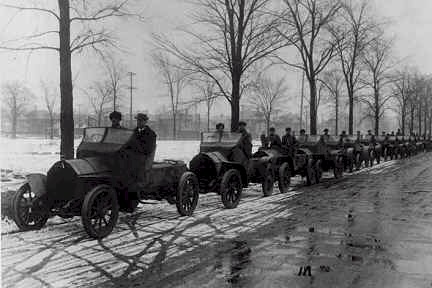 Automobile travel was slow and treacherous in 1904.

In May 1904, His Imperial Highness, Prince Pu Lun of China, visited the city of Indianapolis. The prince must have shared Americans’ new fascination with the automobile, because his visit was highlighted by a motorcade from the capital city west to Lafayette and then back again, organized by the Automobile Club of Indiana. The adventure was deemed a success by the participants; modern drivers would view the slow pace and the myriad problems as a disaster story on wheels.

Before the trip could begin, the car designated to carry the prince narrowly avoided damage. A canvas apron intended to protect the car’s mechanisms from too much dust caught fire from a gasoline leak—the flames were put out by the contents of a passing milk truck. Another car, intended to lead the caravan along its journey, was headed downtown for the beginning of the trip when its driver lost control and crashed the vehicle onto the front porch of a home.

At 10:30 a.m. on May 23rd, the cars started up and headed west out of the city. The first challenge came when the cars “stopped to get ready for the high hills” west of the White River. The cars crossed the bridge over the river in single file and then “spurted up the lower part of the hill and without exception succeeded in reaching the top without an accident.”

The cars and their dust-covered passengers formed a parade of sorts through the Indiana countryside, as Hoosiers came out to view the unusual sight of automobiles passing their homes and farms. Some of the cars had no cooling mechanism and were forced to stop at intervals; soon the line of automobiles strung out for 8 miles.

Some drivers had to stop to change flat tires; the entire group was delayed in places by muddy roads. By 1:30 in the afternoon, the first cars in the line arrived in Frankfort, Indiana. They had covered 47 miles in a little more than three hours; the entire trip to Lafayette would take four and a half hours of driving time, not considering the numerous stops for cooling, tire changing, and other necessities of early 20th-century automobiling. Today the distance can be covered in little more than one hour.