An epic tale by a Civil War general spawned a marketing frenzy that set a precedent for the commercial campaigns accompanying every blockbuster movie today. 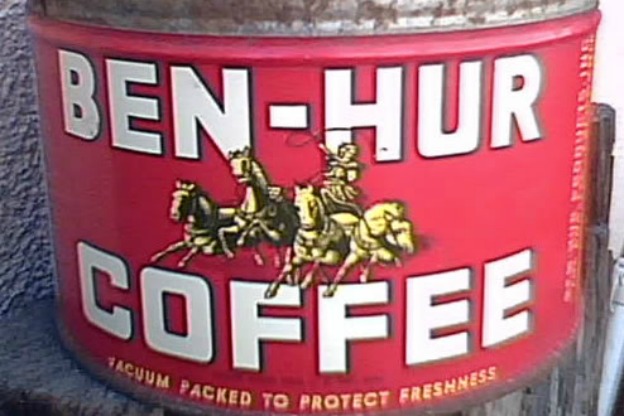 Ben Hur Coffee was one of the many commercial products symbiotically linked to Lew Wallace's novel.

Today we expect that certain types of media, especially blockbuster movies and children’s cartoon characters, will come laden with commercial ties-ins: meals at fast-food restaurants, and books, toys, and clothing that fans and collectors will clamor for.

But marketing through merchandising is not a new phenomenon.

For many decades after its initial publication, a best-selling novel by Hoosier Lew Wallace, and two film adaptations of the book in the 1920s and again in the 1950s, inspired a flood of commercial products.

Indiana native Lew Wallace was a major general in the Civil War, and later a territorial governor of New Mexico, but he became best-known for his later-life career as an author–and by far his best-selling work was Ben-Hur: A Tale of the Christ, published in 1880.

Even before the first movie version of the book was made, the novel’s popularity spawned tie-ins. In 1896, the Central Cycle Manufacturing Company of Indianapolis offered a Ben-Hur bicycle. In the early 1900s, a California citrus company offered Ben Hur fruit; housewives could buy an entire line of Ben Hur spices and cans of Ben Hur coffee. In 1903, ads began to appear for Ben-Hur Flour—“in the race to win your favor.”

Metro Goldwyn Mayer studios made the first silent version of Ben-Hur in 1925. As tie-ins to the film, Jergens offered an entire line of toiletries and some of the film’s stars offered their names to promote the products. Ben-Hur perfume became particularly popular and, in an April 1926 issue of Photoplay magazine, was extolled by the film’s two female leads as being “delicate” and “exquisite.”

An advertisement for Quaker Oats showed a photo of the chariot race scene being filmed and told readers that “heads of great businesses are urging correct breakfast eating” to ensure the health and productivity of their employees.

The 1959 MGM epic version of the Ben-Hur story prompted the production of tie-ins “for every room in the house and for every member of the family,” as one studio press release put it. Fans of the movie could buy “oriental” clothing and jewelry suggested by the movie’s design; children could create paint-by-number scenes from the movie and could play with charioteer action figures.

Lew Wallace died in 1905; his most famous story and the characters in it lived on in print, on film, and in an array of commercial products.

Howard Miller, “The Charioteer and the Christ: Ben-Hur in America from the Gilded Age to the Culture Wars,” IMH June 2008