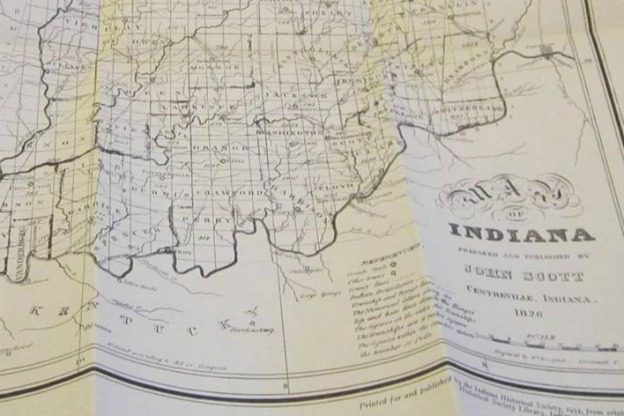 In 1824, printer John Scott began to issue a newspaper in the town of Centerville, Indiana. The area would grow in the 1830s and 1840s as the National Road made its way westward from Ohio through central Indiana and through the town itself, but in the mid-1820s Centerville could boast of fewer than 50 families. Scott’s ambitions extended beyond his town, however, for two years later he undertook the considerable task of producing a gazetteer to the entire state of Indiana.

In the nineteenth century, as white settlers made their way through the states formed from the Old Northwest territory and even further westward across the Mississippi River, many were helped on their way by books which offered information about the counties, towns, and rivers of their destination. These gazetteers were written and published by printers like John Scott. Scott gathered information about every county and hundreds of towns in Indiana—population, location, quality of the land, businesses in each town—and also wrote about the locations and sizes of the most important rivers.

Readers could learn that Fort Wayne, which had just been laid out in 1825 “at the site of the old Fort of the same name,” offered 80 acre tracts of surveyed land that could be purchased at the local land office. It was already the site of considerable fur trade by both French and Native American traders with Detroit and Canada and, Scott added, “it bids fair to become one of the first places of trade in the state.”

Scott had even higher expectations for the town of Lafayette: “Few places on the Wabash [River] offer a more advantageous situation for commerce.” The country was fertile; the river was sufficiently wide and deep that steamboats could dock at the town; and Scott predicted that Lafayette would be “the outlet of a grand canal that will, at no distant day, form the most convenient connecting link between the great north-western Lakes and the lower Mississippi.”

Although not all of Scott’s predictions came true, publications like his gazetteer helped lure settlers westward into the towns of Indiana and other frontier states and fulfilled his wish that the book would allow readers “to obtain a correct knowledge of the natural advantages, and the acquired resources” of the state.