Anna Symmes Harrison had not yet made it to Washington when her husband gave his inaugural address. As she prepared to leave, she received news of his death. 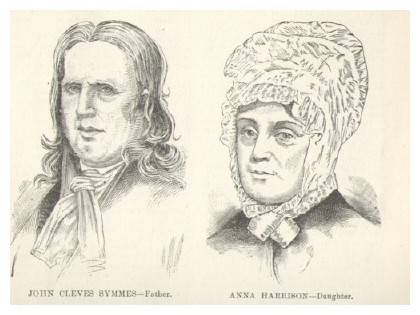 In November 1795, at the age of 20, and in the face of her father’s disapproval, Anna Symmes married a young army officer from Virginia.

John Cleve Symmes was a Continental Army veteran and delegate to the Continental Congress, and former chief justice of the New Jersey Supreme Court, who had become the judge of the Northwest Territory in 1787. With a grant of one million acres of land on the new frontier, Symmes was a powerful and wealthy man.

His daughter Anna had been educated in New York and then joined her father in Ohio in 1794, where she met Captain William Henry Harrison, who had been fighting against the Native Americans who opposed white settlement.

Although he’d intended a better match for his daughter, Anna  fell in love with the Virginian, who had been fighting against the Native Americans who opposed white settlement.

For the first years of marriage, Anna Harrison lived in a small log home in North Bend, Ohio, and raised three children. For a few years, her husband continued his military career and then resigned his commission to pursue a career of public service. In 1801, William Henry Harrison became the first governor of the Indiana Territory; he and his family moved to the town of Vincennes and built an imposing brick mansion (at least by territory standards) they named Grouseland.

For more than a decade, Anna Harrison lived on the Indiana frontier, caring for and educating her growing flock of children, and acting as hostess to anyone of importance who ventured into the Indiana wilderness to visit the territorial capital.Anna was a religious woman, and her remaining letters show her devotion to her faith and to her family. In the years she lived at Grouseland, Anna was busy giving birth to and raising children—by 1812, when she left Indiana, the family included eight boys and girls.

The War of 1812 brought turmoil to Vincennes, and Gov. Harrison sent his family back to Ohio. Anna gave birth to three more children, the last of whom died in infancy. Throughout the remainder of her husband’s career, which took him to the U.S. Congress, to Columbia as the nation’s minister to that country, and finally to the White House, Anna remained at home in Ohio (in a house that had grown from a small log building to a 22-room dwelling). Anna had not yet joined her husband in Washington, D.C., when he gave his inaugural address as President of the United States, and as she prepared to leave, she received the news of his death.

Anna Symmes Harrison would outlive her husband and ten of her eleven children. She died at the age of 88 in Ohio, in her home of her surviving son, John Scott Harrison— whose son, Benjamin Harrison would become the 23rd President of the United States.