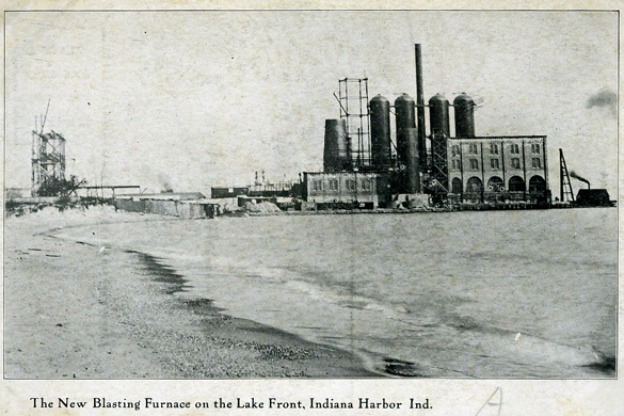 As Inland Steel developed its steelworks in the first decade of the 20th century, residential class lines were quickly drawn. Factory workers lived closer to the industrial center than their bosses.

Beginning in 1903, when Inland Steel began construction of its massive steelworks along the shore of Lake Michigan, the Indiana Harbor area of East Chicago, Indiana, changed within a few short years from undeveloped sand dunes to industrial center. From the beginning, as developers acquired and platted out residential areas, they carefully separated out homes and living areas for the middle class—managers, businessmen, and a few of the most skilled factory workers—apart from the dense, mixed-use areas that housed those who toiled in the steel mill and other factories.

In Indiana Harbor, the first elite middle-class neighborhood of fine homes was built along Lake Michigan, anchored by the fancy South Bay Hotel. As rail lines and factories continued to spring up along the shoreline, those who could afford to moved inland a mile or more southwest of the industrial core of Indiana Harbor. By 1907, along new tree-lined streets, architect-designed colonial and Tudor-style homes were being purchased by steel company executives, bankers, and a few select highly skilled steelworkers and their families. These houses boasted parlors, formal dining rooms, and plenty of space for entertaining as well as family living. On one block, a Carnegie library was built across from the new Methodist Church.

At the same time, some factory workers were buying small bungalows built near the mills and railroad tracks; many more were sharing crowded apartments in areas where industry and business existed side-by-side with families’ living spaces.

By the mid-1910s and early 1920s, industrial growth moved the well-to-do even farther away from the lakefront of Indiana Harbor. The elegant Washington Park subdivision proudly advertised a minimum price point for its homes and boasted of its restrictions. Like many other areas in East Chicago, and other cities of the Region, Washington Park prohibited blacks and Mexicans from buying or renting a home within its boundaries. Not until the civil rights reforms of the 1960s were affluent African Americans finally able to purchase homes in Washington Park. The economic, social, and racial lines drawn in Indiana Harbor, as in so many others places, held firm for many decades after the first middle class families moved into their fine homes as far as possible from the noise and crowding of industrial northwest Indiana.