"The county loses its charm when everything is hard," Lucie Hartrath claimed. "The wind blows the mist away and every detail in the landscape is visible." 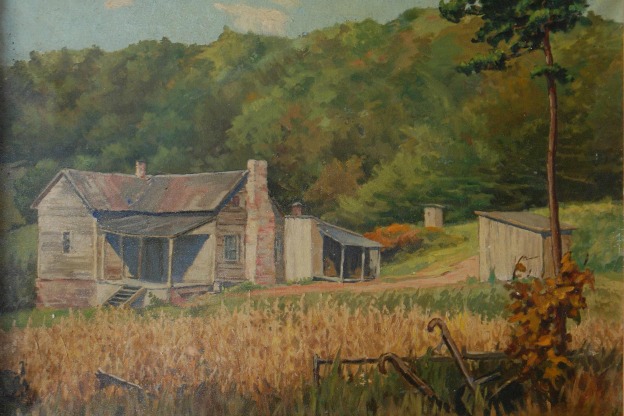 Among collectors and admirers of early 20th century Chicago painters, the name Lucie Hartrath (1867-1962) is still well-known. The impressionist painter was also, however, an important member of the Brown County Art Colony, but today far less famous than T. C. Steele, Ada Shulz, and others in that group.

Hartrath was born in Boston and trained extensively in Paris and then at the Chicago Art Institute. By the turn of the century, she was exhibiting her paintings in the United States and across Europe. She spent two years as head of the art department at Rockford College in Illinois; in 1908 she established a studio in Chicago.

In the same year, she first visited Brown County in southern Indiana. In 1912, she began to visit and work there on a regular basis, renting a cabin every summer. Hartrath preferred painting landscapes during the warm, green months of the year. Brown County photographer Frank Hohenberger, a contemporary who knew Hartrath and many other members of the Hoosier Group, recorded in his journal her comment that “the county loses its charm when everything is hard—the wind blows the mist away and every detail in the landscape is visible.”

Hartrath was sometimes frustrated by the challenges of plein air painting as the winds swirled around the hills of southern Indiana. Hohenberger made another entry in his journal, quoting the painter: “Wind would blow and away goes the easel, painting is mussed up, your hat leaves next.” Lucie Hartrath’s work lives on in her paintings; in Brown County, her dedication to art can be seen today in the Brown County Art Association, which she helped to found.