Indiana's new capital had been established in 1825 without a fire brigade; not until a year and a half later was a volunteer company organized in Indianapolis. 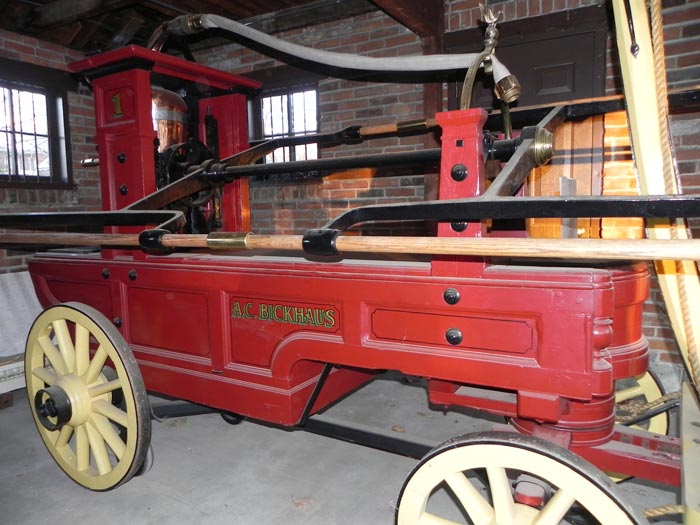 In 1835, the completion of the new State House prompted the General Assembly to appropriate funds for a fire engine.

On January 10, 1825, the capital of the young state of Indiana was officially moved from Corydon to Indianapolis. On January 17, the capital’s first documented fire took place along Washington Street, at a wooden tavern near the courthouse. An 1821 state law permitted 40 or more citizens of any town to organize a fire fighting company, but the new capital had been founded without a fire brigade; not until a year and a half later was a company organized in June 1826.

Indianapolis’s first firefighting company was a volunteer bucket and ladder brigade, barely adequate for the town’s early wooden buildings. In 1835, the completion of the new State House prompted the General Assembly to appropriate funds for a fire engine, and a sufficient number of new buckets and ladders to ensure that the company could reach the dome of the statehouse and protect the valuable records that now resided therein. Even then, the state paid for the ladders and buckets but only half the cost of the engine—city residents paid for the other half.

The new engine was placed in a small frame building on Governor’s Circle. In 1851, the now ramshackle building, extremely unpopular with the fire fighters, mysteriously caught on fire; in 1855, a new brick building was erected to house the department. Five public wells were dug to provide water for the new engine. By the middle of the century, nearly 600 men were listed as members of the volunteer force.

The volunteers took pride in their companies, and companies competed to be the first to arrive at a fire. They were also known to play pranks during down times—a favorite was launching watery assaults against local houses of prostitution, hosing down the residents and the rooms in the brothels.

The first professional, salaried fire department was established, on a limited scale, in November 1859. By this time, the Indianapolis Fire Department boasted seven companies—$300 per year was paid to two firefighters who remained at the company station year-round; the other firefighters, on call when needed, were paid $25 each. In the years following the Civil War, the IFD grew substantially, so that by 1877 its budget was an astonishing $96,000.

From modest beginnings, the department had taken its place as a professional service within the capital city of Indiana.