A rash of robberies in the 1920s prompted bank employees to take up arms in the name of vigilante justice. 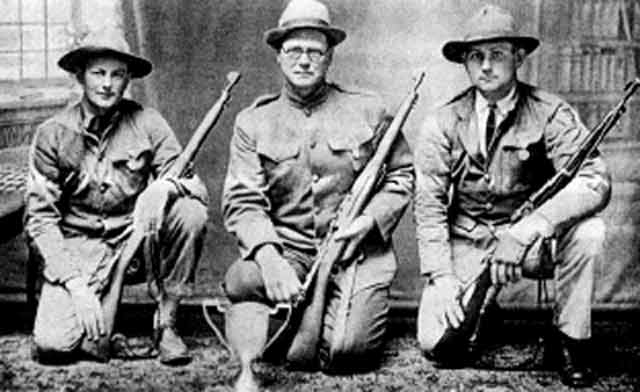 On May 29, 1933, three men entered the State Exchange Bank in Culver, Indiana, armed with shotguns. They forced a bank employee to open the vault and escaped with more than $12,000 in cash. Just a few hours later, however, the bandits were captured and the money recovered – not by the police or the FBI but by hundred of private citizens.

During the 1920s, as automobiles became more available and more powerful, and as roads were improved, crime began to follow the new mode of transportation. Bank robbers could now rob a bank (or several) in a day and be in the next county or the next state by the time law enforcement had arrived at the crime scene.

In the 1920s, the towns and cities of Indiana were filled with small, competing banks; local and county police and sheriffs’ departments were largely understaffed and poorly funded. Even the new State Motor Vehicle Police had only a few “wornout cars and dilapidated motorcycles,” and they operated under a mandate to pursue those who had stolen cars–but not those who had stolen money and were getting away in cars.

Indiana, like other midwestern states, was thus ripe for picking by bank robbers, who could afford fast cars and who used them to take more than $1 million from the state’s banks during the 1920s. The Indiana Bankers Association lobbied the state legislature for better law enforcement but they also began to take matters into their own hands – the bankers began to train their own employees and groups of local citizens to form vigilante groups.

Bank tellers—men and women—were given pistols and rifles and were trained in how to use them. Some banks set up firing ranges in their basements so that employees could practice in their off hours. The IBA sponsored yearly target shooting competitions. Individual banks and towns also banded together to form information networks. Bankers drew up diagrams of every county within a designated driving radius – the moment a bank had been robbed, bankers, citizen vigilantes, and police in surrounding counties could be notified via telephone to be on the lookout and to cordon off roads and block bridges.

And sometimes the vigilantes got their men – in the Culver robbery, the bank president’s son, perched atop a nearby roof, was able to shoot and kill the driver of the getaway car as the robbers left the bank. Although the rest of the thieves stole another car for their flight, they were pursued and crashed the second car a few miles out of town. The bank robbers fled on foot into the woods, where the local vigilantes were able to capture them one by one. The Chicago Tribune reported the next day: “Culver Trains Guns on Bank Bandits; Gets 6.”

In 1933, new Indiana governor Paul McNutt created the Indiana State Police. State and local governments began to discourage the citizen vigilante groups, and the IBA undertook a fund drive to buy the best in radio equipment for the new police force’s vehicles. Bank vigilantes went back to their regular jobs, and the era of intrepid private citizens trading shots with bank robbers came to a close.