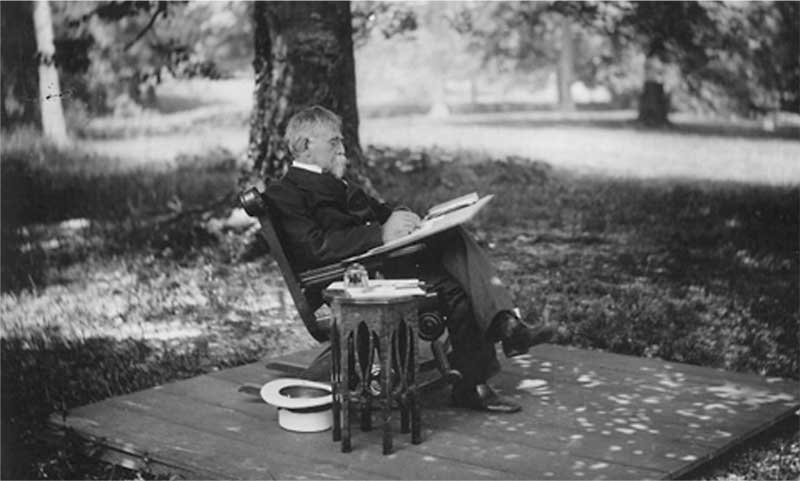 Lew Wallace writing under his favorite beech tree, Crawfordsville, Indiana, c. 1900 Lew Wallace returned home to Crawfordsville as often as he could to rest and write. It was there that he began the manuscript of Ben-Hur.

In 1836, the young town of Crawfordsville, Indiana, audaciously proclaimed itself the “Athens” of the state. In the years after the Civil War, the town could solidify its claim by pointing to a number of popular authors either born in Crawfordsville or working there.

Among modern readers, the best-known are novelists Meredith Nicholson and Lew Wallace. Nicholson (1866-1947) was born in Crawfordsville, but is generally more associated with Indianapolis, where he moved as a six-year-old boy, and where he lived as an adult and wrote his novels. Wallace (born in Brookville, Indiana in 1827) retired to Crawfordsville after a career in the military and as a territorial governor; and from his home and study he wrote his bestselling Ben-Hur: A Tale of the Christ (1880) and other works, until his death in 1905. But the town can also lay claim to other writers, widely read in their time but more obscure today.

Susan Elston Wallace (1830-1907) was born in Crawfordsville and married Lew Wallace in 1852. She was a poet, but published only a few of her poems. Most of her published work was in the form of essays about her travels in the United States and abroad. In 1888, her book The Land of the Pueblos appeared, based on her impressions of the American Southwest during the time she spent with her husband while he was territorial governor of New Mexico.

Mary Hannah Krout (1851-1927) was also a Crawfordsville native. She enjoyed a successful career as a journalist, first working as a correspondent and an editor at several Indiana newspapers. Her decade-long work for The Chicago Inter Ocean sent her all over the world, and of her eight books, seven were based upon her travels. Her favorite subject—detailed in five books—was Hawaii. She returned to her hometown the last two decades of her life.

Maurice Thompson (born in Fairfield, Indiana, in 1844) is still known to many Hoosiers as the author of Alice of Old Vincennes (1900), published not long before his death in Crawfordsville in 1901. Thompson spent much of his life, however, writing stories, novels, and non-fiction. He was best-known during his lifetime for his books on archery, including the poetically titled The Witchery of Archery, first published in 1878 and republished after his death in 1928. Thompson became known for popularizing the sport among boys and young men, and also wrote The Boys’ Book of Sports and Outdoor Life (1886).

Most of the books written by Crawfordsville’s authors can be found today only in antiquarian bookstores; some are reappearing in e-book reprints. The city of Crawfordsville continues to remember its best-known author Lew Wallace at his beautifully restored study, which is a museum and educational center.