The 1850 Census And The Lost Citizens Of Richmond

Richmond had grown rapidly since the construction of the National Road, so citizens were dismayed to discover their town had officially decreased in population 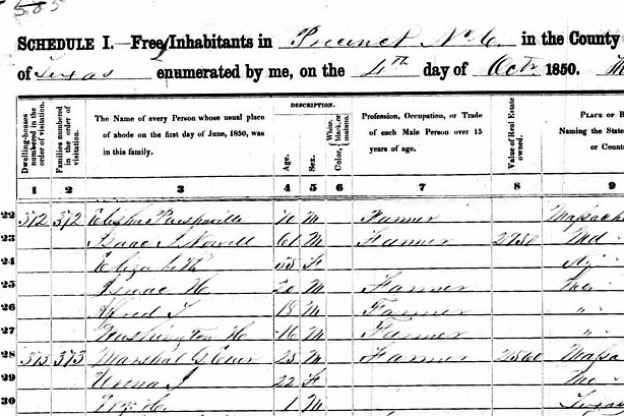 Disorganized record-keeping may have been the culprit when the 1850 census reported that the population of the thriving city of Richmond, Indiana had dipped.

In the 1830s, as sections of the National Road were completed through the state of Indiana, many towns along the road experienced rapid growth. Richmond, near the border with Ohio, grew throughout the decade and by the time of the 1840 census boasted a population of 2,070, placing it with Indianapolis, Vincennes, Madison, and New Albany as important towns in the young state.

Richmond continued to add homes, businesses, stores, and schools throughout the 1840s; and boosters looked forward to the official results of the 1850 census, which would confirm the status of their town. The citizens of Richmond were surprised and confused when the federal government published the results of the count—their town had decreased in population to 1,443. The number did not tally with an unofficial count, published in the local newspaper, of almost 2,600. But no-one challenged the official government numbers, and the population statistic went down into the historical record.

Richmond and its denizens must have been gratified when the 1860 census showed a remarkable increase in population—now the town boasted 6,600 residents. Most historians accepted the remarkable 500% increase and then tried to explain it. Only in the 20th century did close examination of the original census schedules suggest that human error lay behind the strange statistics.

Close examination of the original, hand-written data of the census takers reveals that more than one man assigned to the various townships within Richmond went about his work in a most unorganized fashion. The census records should have been ordered by township, but more than one set of records broke off suddenly with large portions of a township missing—then after dozens of pages on another township, names and addresses from the first township suddenly reappeared on the sheets. Federal clerks, unable to make their way through the maze of poorly organized information, appear to have neglected several hundred Richmond citizens whose names and information became lost in the disorder.

A closer look at the names of some of those left out of the 1850 count support this thesis. According to the 1850 census of Richmond, one of its city council members and his family were nowhere to be found in the town—nor was the town’s mayor. But the 1850 census stands—and when genealogists log onto Ancestry.com, the lost citizens of Richmond, Indiana, still haunt its web pages.

Source: George Blakey, “The Year Richmond, Indiana, Got Lost in the Census: 1850 as a Demographic Dilemma,” Indiana Magazine of History March 1998.