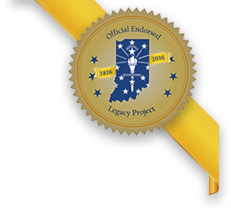 Lew Wallace (1827-1905) is one of the most significant Hoosiers in Indiana history. Wallace accomplished many remarkable things in his life, yet today, when people are asked “Who was Lew Wallace?” many respond “Lew Who?”

Wallace played a leading role in America’s military, political, diplomatic, and literary affairs during the 19th century. He was passionate about books and combat, and dreamed of fame on the battlefield. He was the youngest major general in the Union Army and had success fighting Confederate forces at Forts Henry and Donelson during the Civil War. Yet, at the Battle of Shiloh, Wallace found himself in controversy that haunted him for the remainder of his life.

Wallace’s lasting fame ultimately came from authoring Ben-Hur: A Tale of the Christ, one of the best-selling novels of all time. Beyond his role as author and soldier, Wallace was also a lawyer; serving on the commissions that tried two of the most infamous acts of the Civil War; governor of the New Mexico territory, where he interacted with the notorious outlaw Billy the Kid; and minister to the Ottoman Empire in Constantinople, where he befriended the Sultan. With the success of Ben-Hur, Wallace returned to his home in Crawfordsville, Indiana where he constructed his dream study, a place he called “a pleasure-house for my soul.” 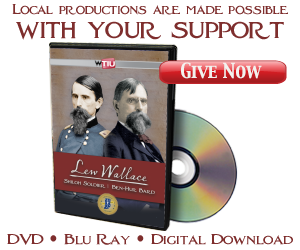 With additional funding provided by Curry Auto Center and by BioCrossroads.