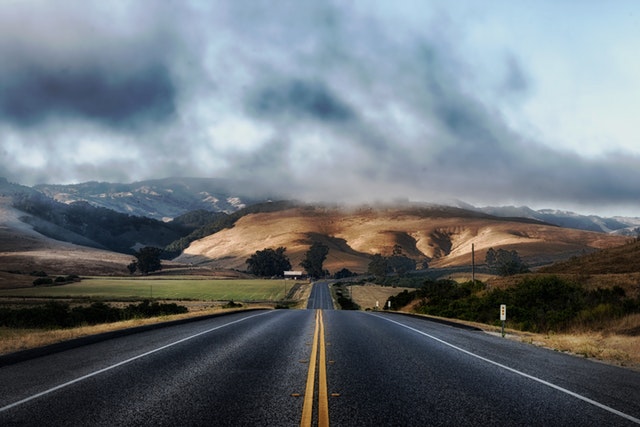 This hour on Harmonia, we'll hit the road, exploring medieval and renaissance songs of travel, mostly from Spain and Portugal.Â We'll hear from travelers navigating by the light of the moon, leaving behind lovers, and we'll hear from the abandoned lovers themselves, anxiously awaiting the return of their beloved.

In our final segment, we'll turn to France for some delightful instrumental music by Cleveland-based ensemble Les DÃ©lices from their album Age of Indulgence.

From the Augsburg Early Music Ensemble, that was "Ben pode Santa Maria" from the Cantigas de Santa Maria.Â This track is from a 2003 release, Medieval Pilgrimage to Santiago.Â The traveler in this song slays a dragon on his pilgrimage from Valencia to Salas after praying to the Virgin Mary for protection.

Traveling by moonlight gives one much to sing about:


All night long you give me light.

You give me light up in the mountains;

Wherever I come and go!

All night long you give me light.

That was "Ay, luna que reluces," a traveler's ode to the moon, performed by Orphenica Lyra on their 2005 album MÃºsica en el Quijote.

The narrator of our next song could easily be the lover waiting at home for the traveler in "Ay, luna que reluces".Â Here, a woman sits up past midnight waiting for her beloved to return, complaining that the journey is short and he should be home by now.Â We'll hear "Si la noche haze escura" by Diego Pisador, performed by soprano Olalla Aleman and the Viola da Gamba Consort from the University of Salamanca.

That was Diego Pisador's "Si la noche haze escura" from the Cancionero de Uppsala.Â The soprano was Olalla Aleman, accompanied by the University of Salamanca's consort of viols.

The Llibre Vermell de Montserrat is a collection of devotional texts and songs from 1399 written as a sort of guide for pilgrims on their way to see the statue of the Madonna and child at the Santa Maria de Montserrat monastery.Â The songs in this volume were written so pilgrims would have something chaste and pious to sing and dance on their route.

"Stella splendens in monte" implores all of the faithful to take this pilgrimage.Â Much of the song is simply a list of all the types of people who should embark on the journey â€“ rich, poor, monks, soldiers, farmers, lawyers, and queens, to name but a few.Â Next, we'll hear this song performed by the Waverly Consort on their recording Spanish Music of Travel and Discovery.

You've just heard "Stella splendens in monte," an anonymous song from the Llibre Vermell de Montserrat, performed here by the Waverly Consort on their 2003 recording Spanish Music of Travel and Discovery.

The music we are about to hear dates from the 1200's, but was only discovered in 1914 when a librarian happened to unfold a sheet of parchment that covered a fourteenth century manuscript of Cicero's De officiis.Â Inside were seven secular cantigas, six of which were set to music.Â All of the text and music had been composed by Martin Codax, an early minstrel of Galician-Portuguese heritage.Â Taken together, they tell the story of a woman longing for her lover who is at sea.Â From this set, we will hear the fourth, fifth, and sixth cantigas.Â Our female narrator begins:

O God, if only my friend knew


How lonely I am in Vigo

In the next song, she asks her friend to come bathe with her in Vigo Bay as she awaits the return of her lover.Â In the next, she dances:

In a sanctuary in Vigo,


A gracious body was dancing.

In Vigo, in a sanctuary,

A svelte body was dancing.

The Carmina Burana is a 13th-century manuscript of 254 bawdy and satirical poems and dramatic texts.Â A quarter of these works were set to music, using a style of neumes that are nearly impossible to decipher today.Â Luckily, many of these tunes appear in other collections with more sophisticated musical notation, allowing the modern performer to piece together transcriptions.Â Interestingly, at the time that Carl Orff composed his famous work using the texts from the Carmina Burana, the melodies of these poems had not yet been deciphered, so he wrote entirely new melodic material.

We'll hear "Dulce solum natalis patrie" from the Carmina Burana, a song about a student who has moved to Paris and is missing his friends and family back home.Â The following is a performance by Clemencic Consort from the album Carmina Burana: Codex Buranus Original Version, recorded in 2008.

Next, we turn to the Cantigas de Santa Maria, a monumental 13th-century collection of works honoring the Virgin Mary.Â From this collection, we'll hear "Como Poden per sas Culpas", a song about a crippled man who promises to embark on a yearly pilgrimage to bring a quantity of wax to the Virgin Mary.Â The man is healed and makes the journey to Salas to make good on his promise.

In the final minutes of today's program, we'll explore a recently-released recording by Cleveland-based ensemble Les DÃ©lices, Age of Indulgence.Â Led by oboist Debra Nagy, this group presents bold, stylish concerts and recordings of early French music.Â First, we'll hear FranÃ§ois-AndrÃ© Danican Philidor's Quartet No. 1 in G minor from L'art de la modulation, a collection of six quartets published in 1755.Â Philidor was a prolific opera composer, but was more well-known as a chess player.Â He was regarded as the best chess player of his day, and even wrote a treatise on the game.

From the album Age of Indulgence by Les DÃ©lices, this is Quartet No. 1 in G Minor from L'art de la modulation.

You've just heard Philidor's Quartet No. 1 in G Minor from the album Age of Indulgence by Les DÃ©lices, led by oboist Debra Nagy.

From the same album, we'll now explore a bit of incidental music from Dardanus, an opera by Jean-Philippe Rameau.Â Let's listen now to the chaconne that is found at the conclusion of the opera, again performed by Les DÃ©lices on the album Age of Indulgence.

That was the chaconne from Dardanus by Jean-Philippe Rameau, performed by Les DÃ©lices on their recently-released album Age of Indulgence.

The writers for this edition ofÂ HarmoniaÂ wasÂ David McCormick.