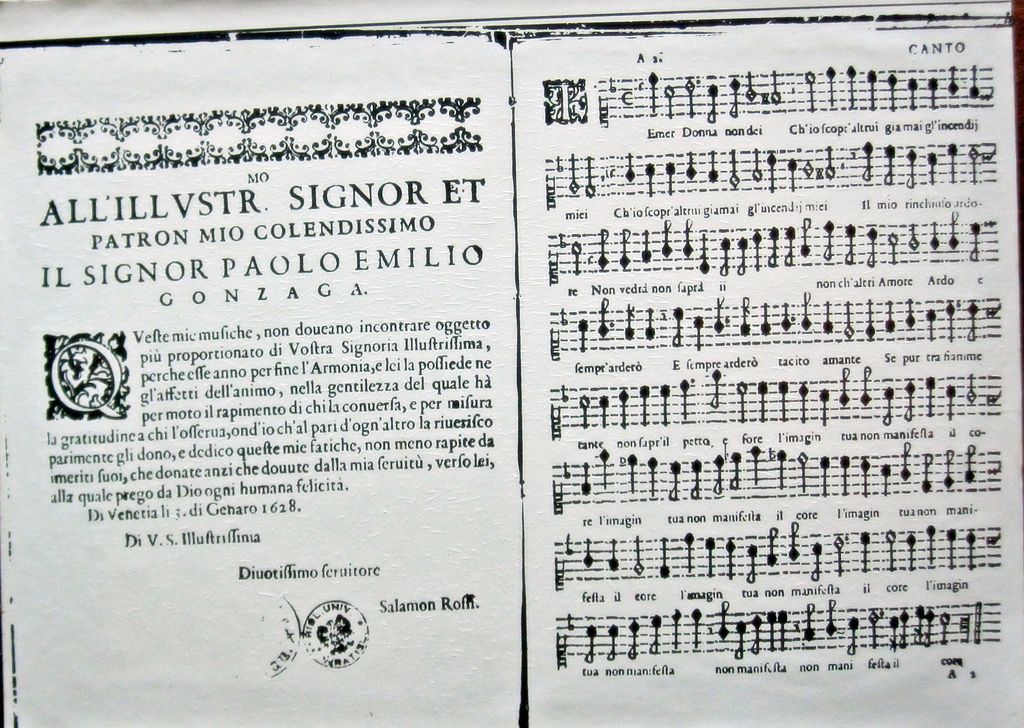 Salamone Rossi was an Italian string player and composer working at the turn of the 17th century, a contemporary of Monteverdi and Caccini. Join us as we mull musically over a Mantuan musician who left an indelible imprint on European music. Speaking of indelible, our featured release is a 2018 recording from The Brook Street Band, showcasing the violin sonatas of George Frideric Handel.

We heard a sonata for violin and continuo in G major, composed by George Frideric Handel, and performed by members of The Brook Street Band, including Rachel Harris on the baroque violin, Tatty Theo on the cello, and Carolyn Gibley on the harpsichord. Named for the London street where Handel lived for close to 40 years in the middle of the 18th century, The Brook Street Band celebrated their 20th anniversary in 2016.

Salamone Rossi appears to have spent his entire career in Mantua. Whilst he was not a regular member of the Gonzaga court musicians, he was often hired by the court as a string player. Evidence suggests that Rossi’s principal professional connections were with one of the Jewish theatrical troupes that played such a significant role in Mantuan theatrical life, not only in the ghetto but also in the outer community and at court. Rossi's sister, known as Madama Europa, was a singer, also employed at the Gonzaga court.

The Mantuan Ghetto was created in 1612 and, prospering yet secluded from Christian society, was moved to look back to its roots. Rossi created a new genre that was inspired by the music in the ancient temple of Jerusalem. It could have marked the beginning of a Jewish musical renaissance, but this revolution was not to be. In 1630, Austrian troops invaded and defeated the Gonzagas, then destroyed and sacked the Jewish ghetto in Mantua, which was then ravaged by plague. Salamone and Madama Europa disappeared after the end of the Gonzaga court.

Luckily, 13 volumes of music by Rossi published between 1589 and 1628 survive. Most of it is Italian secular polyphony – madrigals, conzonette, balletti and madrigaletti – and instrumental music. His first book of madrigals was very popular, reprinted three times in his lifetime. Despite the continuo part which was added after the fact to the first book, and included with the second book, the musical style of the madrigals is conservative, though the music is satisfying and certainly interesting. And though Rossi was one of the earliest composers to include a separate continuo part with his works, such an addition seems to be a printed confirmation of an existing practice, so we mustn’t be fooled into thinking Rossi invented continuo playing.

Like his contemporaries, Rossi looked to the fashionable poets of his day – Marino, Guarini, Rinuccini – for madrigal texts. In his First Book of Madrigals, Rossi sets a poem of Ottavio Rinuccini about a lovesick man pouring forth to the stars.

That was a madrigal in five parts from Rossi’s First Book of Madrigals, printed in 1602. We heard the ensemble Profeti della quinta onits, from a 2014 Linn recording entitled Il Mantovano Hebreo. Here’s a setting of the same poem by Giulio Caccini from his ground-breaking Nuove Musiche of 1614.

From the 2014 Glossa recording entitled The Medici castrato; a homage to Gualberto Magli that was Caccini’s “Sfogava con le stelle.” Despite the very different scoring, you can hear in both pieces a word-oriented approach to the music, and even the music itself, in particular the ending of both pieces, has a certain similarity.

Rossi’s first book also includes the first printed intabulation for the chitarrone, a six-foot long plucked instrument with 12-16 strings, for six of the pieces. It can accompany the five singers, basically playing a basso continuo, a practice that became popular in this period. Or else one can sing the top line as a solo accompanied by the chitarrone, as we hear in this Rossi setting of “Cor mio, deh non languire.” In this piece the poet, Giovanni Guarini, tells his heart not to languish, for it makes his soul languish with it.

That was Ut Musica Poesis performing “Cor mio, deh non languire” from its 2007 Brilliant Classics CD entitled Vocal works, madrigals and Canti di Salomone. Did you notice the textural similarity to the Caccini piece we just heard? A single voice, accompanied by an instrument that is more or less reducing a polyphonic piece to a chordal accompaniment. What a wonderful illustration of the transition from renaissance madrigal to the monodic style that defined the new practice. Just to complete our journey, let’s hear that same madrigal in four parts with chitarrone accompaniment, and in this case we get to hear the chitarrone player improvise a ricercar before playing the written part with the singers.

Rossi’s earliest publications of instrumental music date from 1607 and 1608. In them we find sinfonies, short pieces with two repeated sections – in addition to canzonas and dances – gagliarde, correnti and brando. Let’s hear a couple of sinfonias first from the early books.

That was Il Giardino Harmonica playing two Rossi symphonies from their 2000 Teldec CD Viaggio musicale musica italiana del Seicento. Now a couple of dance pieces, first a gagliarde, then a corrente, then a brando, a duple dance probably along the lines of a branle.

The ensemble Muscadin played the “Gagliarda quinta detta Amor perfetto” from the 2008 Pan Classics release The song of Solomon and instrumental music, followed by Profeti della Quinti’s renditions of a corrente and a brando from Salamone Rossi: Il Mantovano Hebreo.

Just as he helped transform madrigal into monody, Rossi contributed to the transformation of the instrumental canzona, with its polyphonic texture, into the trio sonata, with prominent upper parts and supporting bass. Now let’s listen to a sample from a late Rossi publication, The third book of assorted sonatas, sinfonies, galliards, brandos and corrento, 2 violins, chit. Notice that canzonas have disappeared from the contents of the volume, and what we have here is a trio sonata texture, with two nearly equal upper parts supported by a bass line and chords.

Salamone Rossi made another contribution that some consider his most important, both from the point of view of music printing and that of European publications of Jewish music. A huge amount of our knowledge of European music is based on surviving publications, and Salamone Rossi was the first composer to grapple with Hebrew texts for music. For the Hebrew language is read from right to left, and Western European music notation has always been read from left to right. So how does one print it? One could simply notate all the music backwards, as is done for the Arabic in Anglican churches in Israel. But Rossi thought that would be too alarming for musicians, so instead he kept whole Hebrew words together, written right to left, and wrote them in reverse order under the groups of notes that set them.

The publication titled Hashirim asher lish’lomo, or ‘The Songs of Solomon,’ is a collection of 33 polyphonic settings in 3-8 parts of Hebrew psalms, hymns and songs that dates from 1622-23. The title seems to be a humorous reference to the composer, since there is no text from the Biblical Song of Solomon in the collection. Let us listen to a piece setting the text of Psalm 128, one of the 15 Psalms of Ascent, a special designation for Psalms 120 —134 that all begin with the words “Shir hamma’alót.” We have heard Rossi’s Italian madrigals performed with the top only sung, the other parts played on chitarrone. In this case the top part is sung down an octave accompanied by viols. The piece could equally be sung by 5 voices.

Jeremy Avis sang Rossi’s setting of Psalm 128, whose final lines resonate: “May you live to see your children’s children – Peace be on Israel.”

The compositions in The Song of Solomon reflect not only the expected influences of Mantuan colleagues like Monteverdi and Gastoldi, but also, in the works for larger forces, the music of the Venetian school.  “L’mi ehpots,” a setting of a text in the popular Jewish verse form of the wedding ode, is an echo dialogue whose ornamented final cadence borrows the gestures of secular monody. Let’s hear it now.

We heard the Ensemble Muscadin and Profeti della quinta in Rossi’s setting of a wedding ode, “L’mi ehpots,” from their 2008 Pan Classics recording The Song of Solomon.

Our featured release this hour catapults us forward a few decades in time, from the 17th century Mantua of Salamone Rossi to the 18th century London of George Frideric Handel.

The Brook Street Band, named after the London street where Handel himself resided for close to 40 years in the mid-18th century, has been known since their 1996 founding for their infectious playing of the music of Handel and his contemporaries. Their 2018 Avie recording of Handel’s sonatas for violin and basso continuo is no exception. Let’s hear a sunny sonata in D major.

We heard the violin sonata in D major, HWV 371, by George Frideric Handel, performed by The Brook Street Band, from a 2018 Avie recording.

The writers for this edition of Harmonia was Wendy Gillespie.