A Musical Tour of Vienna 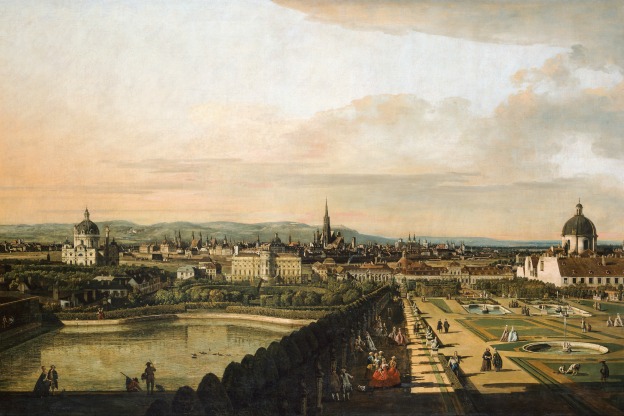 This program begins with music from Johann Heinrich Schmelzer's Sonata no 8 for recorder and gamba performed by Ensemble Caprice. Schmelzer served as a court violinist and eventually Kapellmeister for Emperor Leopold I in Vienna. We'll hear more of his music later in the program.

We begin our musical tour of Vienna at the Kapellhaus of St. Stephen's Cathedral, home of Joseph Haydn in the mid-18th-century.

The young Austrian composer began his musical career at the age of six, traveling from his home village of Rohrau to study music with relatives in the nearby town of Hainburg. After learning both harpsichord and violin, he auditioned for St. Stephen's director of music Georg von Reutter and moved to Vienna in 1740. There, he worked as a chorister for the next nine years.

At that time, St. Stephen's boasted one of Europe's most vibrant musical scenes, and the cathedral's rich artistic environment offered Haydn a wealth of inspiration.

Vienna was a center of education and work for another famous Austrian composer. Ludwig van Beethoven's first journey to Vienna happened in the spring of 1787 in the hope of studying with Mozart. Speculation as to whether the two composers actually met is ongoing, but we do know that Beethoven's first stay in the city was relatively brief. After two weeks, Beethoven was summoned back to Bonn to care for his sick mother and see to other dire family affairs.

Beethoven finally moved to Vienna in 1792.

Little is known about composer Johann Heinrich Schmelzer's origins, but surviving documents paint a picture of a musical life that began in Vienna.

Schmelzer's name appears in the records for Vienna's St. Stephen's Cathedral, where he is believed to have worked as a cornettist. In the late 1630s, Schmelzer was likely employed at the Viennese court chapel, working alongside such notable colleagues as Antonio Bertali, Giovanni Valentini, and Johann Jakob Froberger. He later achieved the rank of Kapellmeister for Emperor Leopold I.

Schmelzer gained reputation throughout Vienna as a superb violinist. An anonymous traveler deemed him "nearly the most eminent [violinist] . . . in all of Europe."

Schmelzer's Sonatae unarum fidium of 1664 demonstrates both his virtuosity as a performer and his skill as a composer. Here is one sonata that calls for alternative scordatura tuning in the solo violin.

Next up on our musical tour of Vienna is the city's Burgtheater, where Christoph Willibald Gluck began work in 1755. Three years prior, the theater had come under court control. Count Giacomo Durazzo vied for Gluck's recruitment, hoping that the composer's presence would help influence a fusion of French and Italian operatic styles.

Next, we'll hear excerpts from one of Gluck's most famous and influential operas, Orfeo ed Euridice. Inspired by the myth of Orpheus, the work was premiered in Vienna's Burgtheater on October 5th, 1762.

Orfeo ed Euridice is emblematic of the reforms Gluck brought to opera during his time in Vienna. Its musical style aimed to enhance the dramatic plot of Orpheus's story and draw less attention to virtuosic singing for its own sake. Lengthy recitatives were enhanced with string accompaniment, while arias featured simpler vocal lines.

On our featured release, the Early Opera Company brings an opera by George Frideric Handel back to life. Serse, an opera seria in three acts, takes place in ancient Persia during the reign of Xerxes the Great. Handel followed in the steps of Giovanni Bononcini and Francesco Cavalli in setting Xerxes's story to music.

The 1738 premier of Handel's Serse in London was nothing short of a failure.

In the early decades of the 18th century, opera seria and opera buffo were distinct genres. Serse's combination of serious and comic operatic elements was highly controversial for its time.

The opera was forgotten for nearly two hundred years. Serse enjoyed its first revival, and marked success, in Germany during the 1920s. It premiered in GÃ¶ttingen in 1924 and was staged over ninety times before 1926.

The writer for this edition of Harmonia is Laura Osterlund.