From Japan To Europe, And Back Again 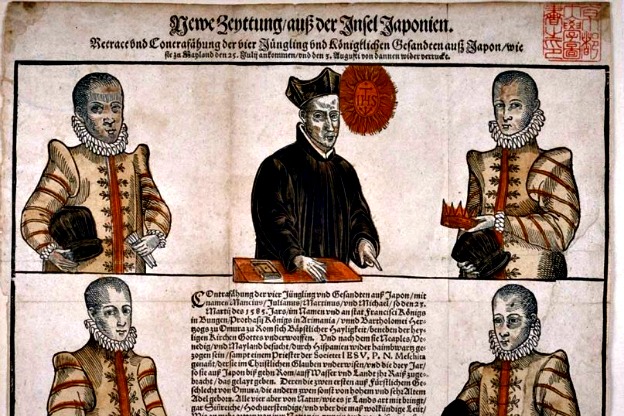 A Listener's Guide to the Renaissance Consort: Cornetto

A consort combines different sized instruments of the same family, or in the case of a broken consort, mixes instruments from different families.

A consort combines different sized instruments of the same family, or in the case of a broken consort, mixes instruments from different families.Â As part of an ongoing exploration of the renaissance consort, here's a bit about the cornetto.

The cornetto is a hybrid, combining the mouthpiece of a brass instrument with the body of a woodwind, and its versatility put it in high demand during the renaissance. The instrument required amazing breath control of a musician. The music theorist Marin Mersenne noted that some cornetto players could play eighty to 100 measures in a single breath!

The warm sound of the cornetto could be heard both indoors and outdoors: enlivening dances, playing solo ricercari, or embellishing popular song.Â Let's listen to a solo ricercar by the Italian composer and cornettist Giovanni Bassano.

Cornetto players, such as Giovanni Bassano, were skilled improvisers who could devise rapid divisions on well-known melodies. They also played in consort with the sackbut to accompany church choirs. In 1594, music theorist Ercole Bottrigari wrote of the cornetto:

"Cornetts and trombones are played with such grace, taste and pure precision of the notes, that they are held the most excellent of the wind instruments in the profession. Their divisions are neither scrappy nor so wild that they spoil the underlying melody of the composer's design: but are introduced at such moments and with such vivacity and charm that they give the music the greatest beauty and spirit."

"Columbus sailed the ocean blue in 1492â€¦" is a saying that's long helped school children recall the date of Spanish exploration in the New World. But Portuguese and Spanish missionaries traveled to Asia as well as the Americas, and these travels initiated an exchange of Japanese-European musical practices.

In the 16th century, Jesuit missionaries from Portugal and Spain brought violas da gamba and other instruments to Japan to accompany the singing of masses in their newly founded churches. By the middle of the century the missions were becoming well established. Perhaps to show proof of their success, or, as a way to raise European support for missions in the East, the Jesuits appointed four young Japanese converts to go Europe and meet the Pope.

In 1582, the envoy of these four young men, known as the Tensho boys, set off from Nagasaki travelling first to Portugal and then to Spain. Travel records show that the boys were given royal treatment during their journey, and that along the way, they enjoyed many splendid concerts in European courts and churches.

In Spain the Tensho boys likely encountered the music of Antonio de CabezÃ³n and heard the Spanish court's Capilla Flamenca perform. And, writings from the time indicate that the young men certainly attended events where they would have heard sacred works by TomÃ¡s Luis deÂ Victoria and Cristobal Morales.

After their visit to Spain, the Tensho boys arrived in Italy in 1585 where they had an appointment with the Pope. During this visit to Rome, one can imagine the Tensho boys hearing music by Palestrina, who was a composer active in Rome at that time.

Here are two versions of Palestrina's Tota Pulchra Es. Â The Hilliard Ensemble performs a vocal setting, followed by Bassano's diminutions on the Palestrina work in a performance by theÂ ensemble Anthonello.

After their visit with the Pope, the Tensho boys began the long journey home.Â For one of the delegates, "home" was in the city of Miyazaki, a prefecture on the island of Kyushu in Japan. A folksong that hails from that area of Japan can be found on the same ensemble Anthonello recording as above.

Anthonello also imagined the cross pollination of musical styles in some tracks on their recording Music of the Tensho Boys: Mission to Europe 1582.Â For an example, an intonation of the sacred Christian text Laudate Dominum combined with a different Japanese folksong is also included in the Anthonello CD.

16th century Japanese-European enculturation was relatively short-lived.Â Leaders in Japan were worried that Portugal and Spain had territorial ambitions for Japanese soil and had not only shut down all missionary activities by the mid 17th century, but also prohibited Japanese citizens from traveling abroad. The policy was enforced by executions of those who violated the law. European music and related musical instruments were destroyed. This was the beginning of the Edo era in Japan, which lasted for 265 years.

During the European baroque and classical eras, Japan and Europe were isolated from each other, each developing their own musical styles in parallel universes.

One song form that developed in 17th and 18th century Japan, that didn't develop in Europe was the Koto Kumiuta. These song cycles were usually presented by a singer accompanying themselves on a plucked instrument called the koto.

Here's music from a Koto Kumiuta by the 18th-century Japanese composer Yamada-KengyiÃµ, performed by Namaino Torii from a recording originally released in 1976.

[More information about this recording can be found on the full playlist, under the "music on this episode" tab.]

[Special thanks to Maho Sone Grazzini and Koji Otsuki for their help with music for and editing of this segment. We appreciate you.]

Our featured release is the 2013 recording from Bach Collegium Japan, an ensemble founded in 1990 by its director, Masaaki Suzuki, with the aim of introducing Japanese audiences to period instrument performances of baroque music.

BCJ's latest recording, which was released on the BIS label, is volume 53 in their acclaimed series of J. S. Bach's choral works and Church Cantatas.