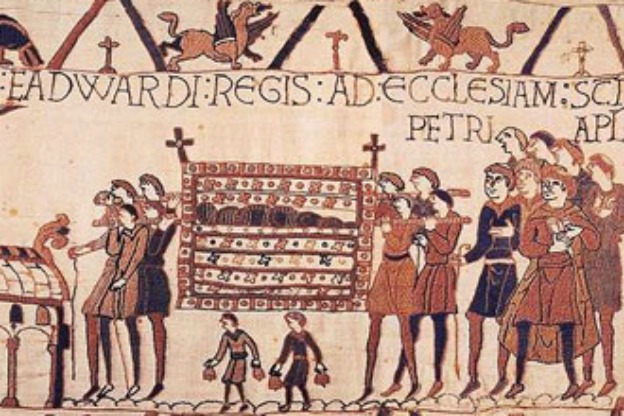 On January 4th, Edward the Confessor, one of the last Anglo-Saxon kings of England, died. On his deathbed, he chose as his successor Harold Godwinson, his wife’s brother. Unfortunately, Edward had already promised the crown to his cousin William, the Duke of Normandy.

Harold was crowned king of England the day after Edward’s death, but he was only able to hold this position for nine months. He and two of his brothers were killed at the Battle of Hastings in October of 1066. This battle was the turning point in the war for control of England, and it remains the last successful conquest of the British Isles by a foreign invader. Duke William of Normandy enlisted the help of nobles from as far away as Italy in his fight for the English crown. He waited until Harold sent his armies north to fight off invading Vikings to make his move on the southern part of England.

The accession of William “the Conqueror” to the throne of England is typically viewed as the end of the Dark Ages and the beginning of the Middle Ages. William was officially crowned on December 25 in Westminster Abbey, but spent most of his rule on the French coast of Normandy.

The year 1066 saw another rebellion in which Slavic peoples protested Christianity in their area of Northern Europe. John Scotus, the Bishop of Mecklenburg, was sacrificed to the Wendish god Radegast  as part of the revolt against Christianity. Radegast, the god of hospitality, was primarily worshipped at a shrine in Mecklenburg, but a statue of him also stands in the Czech mountains.

Islamic scholar Imam Al-Bayhaqi also passed away in 1066. Al-Bayhaqi was known as an expert in the study of hadith, or a record of the traditions and sayings of the Prophet Muhammad.

The reign of the Swedish king Stenkil ended with his death in 1066. He ascended the throne in 1060 following the death of his father-in-law Emund the Old. Stenkil supported the conversion of Sweden to Christianity and is remembered as the king “who loved West Geats before all his other subjects,” as recorded by medieval historian Snorri Sturluson.

In the world of music, a manuscript of harp music in Caesarea [Israel] completed in 1066 bears a resemblance to a harp manuscript written three hundred years earlier in the German city of Aachen. Many know of the Biblical hero David who killed the giant Goliath by knocking him out with a stone between the eyes and then beheading him. The book of Samuel also states that David was a skilled harpist, and he played for the king to relieve his headaches. Many harpists throughout history have seen David as their protector and inspiration, so he appears on many manuscripts devoted to harp music or treatises on the harp. The same is true with the Greek manuscript completed in 1066 and a psalter presented to Pope Hadrian I by Charlemagne in 795.