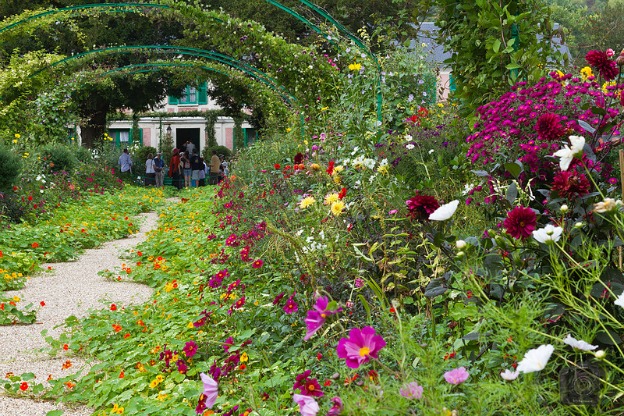 Created between 1883 and 1926, Claude Monet's garden at Giverny is resplendent and it's a must-see destination for gardeners.

The garden fell into disrepair after its creator's death, but thankfully it was restored in the late 1970s and visitors now continue to flock there from all parts of the world.

Last fall, I spent a magical day in the garden. Our guide told us that Monet, unlike most of the other French Impressionists of his time, had an agent who connected well with American buyers and who marketed his paintings effectively, especially in New York City, and because of that Monet became wealthy. This enabled him to hire staff to work in his gardens.

During Monet's lifetime, his two chief priorities were his painting and his flower gardening, but they were actually inseparable.

His property encompassed about four-and-a-half acres with his picturesque pink farmhouse and his walled orchard. He laid out the garden in front of his home so that it was symmetrical and divided by paths but planted with so many flowers that the straight paths were blurred by the flowers exuberantly spilling from the beds. Later he acquired more land across the railroad track from the house to create his water garden. Here he planted his famous water lilies, wisteria, azaleas, rhododendron, and bamboo and constructed bridges from which visitors view the plantings reflected in the water.