A Bush That Burns 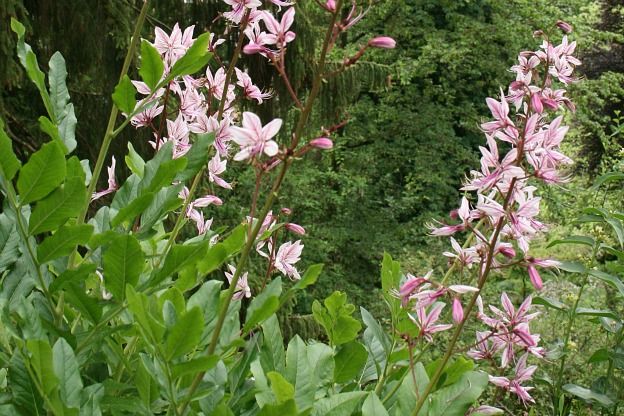 The Bible contains a story in the book of Exodus that refers to a bush that burns but was not consumed. This is purported to have occurred when God spoke to Moses on Mount Sinai.

The bush may have been Dictamnus albus with common names that include burning bush, gas plant, and dittany. It is an herbaceous woody stemmed perennial that produces spikes of little starry flowers in early summer. It grows three feet tall and has glossy green leaves in zones 3 to 9. Full sun and fertile soil are needed for it to flower well, and it can be propagated from seed.

There are both white and pale pink and purple flowering varieties, and all dislike being moved once they are established. These plants are pest free and long lived, however.

They have the unusual habit of exuding aromatic oil from the leaves, and in warm weather a lighted match held near to the leaves is said to result in the bush becoming engulfed in flames. It is such a short flare-up of flames, however, that the plant itself is not harmed.

Bible scholars say the exact species of the plant is not important to know because a miracle occurred regardless of what species it was. Some botanists and gardeners, however, are very interested and believe the plant that Moses saw burning was definitely Dictamnus.