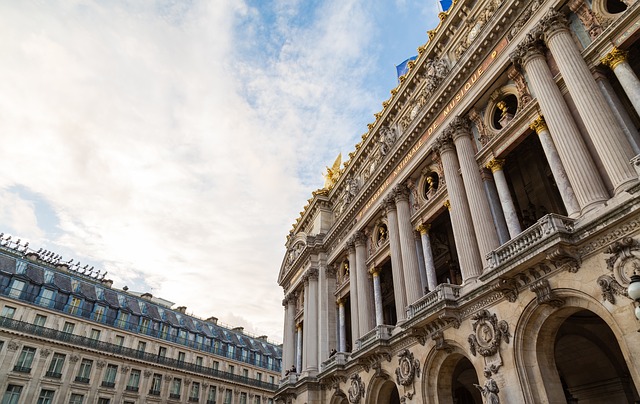 On Ether Game this week, we celebrated the inauguration of the Palais Garnier, the national opera house in Paris, on this day in 1875. An elaborate gala event happened on the evening of the inaugaration with music abounding. Our playlist features several operatic gems that were heard by party goers that evening.

Gioacchino Rossini (1792-1868) William Tell: Overture This well known opera standard was one of the first pieces heard in the newly inaugarated Palais Garnier. An extravagant gala and concert was given on the evening of January 5th 1875, in which several overtures, arias and scenes from popular operas of the French repertoire were performed. We just heard the end of the overture, when flute and the English horn perform a melody known as the Ranz des Vaches or “Call To The Cows,” a traditional, pastoral melody used to herd livestock in the Swiss Alps. This gives way to the “March of the Swiss Soldiers,” one of the most famous themes in classical music and pop culture. Although written by Italian composer, the overture to Guillaume Tell was composed for French audiences in 1829. Rossini had moved to Paris, where he would write four operas to French librettos before an early retirement. This overture would be the last in the operatic genre that he would write of his career.

Mikhail Glinka (1804-1857) Ruslan and Ludmila: Overture Mikhail Glinka is often considered the father of Russian music. He was the first Russian composer to gain international fame, and in the 19th century, he was the undisputed master composer in his home country. After studying in Milan and then Vienna, he realized that his purpose in life was to return to Russia, write music in a Russian style and, therefore, establish a Russian musical tradition, which he did. Among his wide output of musical works, the overture to his opera Ruslan and Ludmila is an orchestral favorite throughout the world. The opera is a setting of a fantasy poem by Alexander Pushkin (the same guy that wrote Russian favorites Eugene Onegin and Boris Godunov), and it’s based on a wide variety of traditional Russian fairy tales. Pushkin himself would have probably written the libretto, but he was killed in a duel just as Glinka began work on the opera.

Claudio Monteverdi (1567-1643) L'Orfeo: Vi ricorda, o boschi ombrosi [Do you remember, o shady woods] Monteverdi’s Orfeo has the distinction of being the earliest opera to still be performed regularly today. It had its premiere during Carnival season in 1607 in Mantua, a city in Northern Italy, which was, during the 17th century, one of the main artistic, cultural, and especially, musical hubs of Italy. In Monteverdi’s day, and for hundreds of years afterwards, new operas premiered during Carnival season, which lasted from the day after Christmas until Shrove Tuesday. Shrove Tuesday, also known as “Fat Tuesday,” is the festive day which precedes Ash Wednesday, the day that, for Christians, marks the beginning of Lent. Throughout the forty days and forty nights of Lent, as Christians embarked on a period of fasting and prayer, no opera performances took place at all! The Catholic Church prohibited it. However, Christians seeking their opera “fix” could still usually find an oratorio, which, despite basically being an opera dressed up in religious garb, was permitted!

Carl Maria von Weber (1786-1826) Der Freischutz: Huntsmen's Chorus Weber’s opera Der Freischütz, sometimes translated as “The Freeshooter” or “The Marksman,” was one of the most important German-language operas in the early 19th century. While most Italian operas around this time dealt with real-life situations, German operas tended to focus on myth and magic, and Der Freischütz was no exception. The story is about Max, an out of luck marksman, who must win a shooting competition in order to win the hand of the beautiful Agathe. While the chilling and ghostly Wolf Glen scene in Act 2 is probably the most well known in the opera, where the primary antagonist Kaspar calls upon the devil to obtain magic bullets, this chorus sung by foresters and hunters while gathering for the marksmanship trial also became very popular, and is one of the most well known operatic choruses in the repertoire today.

Richard Strauss (1864-1949) Salome, OP. 54: Final Scene The gruesome tale of Salome, the step-daughter of King Herod, has long been an inspiration for some great, albeit disturbing, pieces of art. According to the Gospel of Matthew, on King Herod’s birthday, his step-daughter performs for him a dance that so pleases the king, he offers anything to Salome as a reward for her performance. She asks for only one thing: the head of the imprisoned John the Baptist on a silver platter! Strauss’s opera—based on Oscar Wilde’s play of the same name—amps up the sexuality and blood-thirstiness of the lead character. In this climactic ending scene, Salome gloats over the severed head, declaring her love and kissing it passionately. Herod is horrified and calls on the guards to kill Salome, who crush her beneath their shields. The role of Salome is one of the more physically demanding in operatic literature, as it requires a soprano who can reach lower notes typically out of range and has the agility and stamina to dance the famous “Dance of the Seven Veils” midway through the opera.

Giacomo Meyerbeer (1791-1864) Les Huguenots: Nobles seigneurs For those unfamiliar with the opera Les Huguenots, Meyerbeer and his librettists adopt the old storytelling device of taking a historical tragedy and adding a love story to it. In this case, the tragedy is the St. Bartholomew’s Day Massacre of 1572, when a group of French Protestants, called Huguenots, were killed by the Catholic majority. The history of the French Huguenots is dominated by persecution and violence. In fact, as an act of solidarity with another persecuted minority, many Huguenots saved Jewish refugees during World War II and aided them in fleeing Nazi occupied France.A scene from Les Huguenots was performed at the inaugaration of the Palais Garnier, the dramatic “concecration of the swords” scene from Act 4, in which three monks bless the swords and daggers that will be used in the coming massacre.

Daniel-François Auber (1782-1871) La Muette de Portici: 'Mais j'aperçois Pietro...Mieux vaut mourir' Like Meyerbeer, Daniel-Francois-Esprit Auber is remembered as one of the masters of Grand Opera, especially in France. His five-act opera La Muette De Portici was a massive undertaking, incorporating complicated stage machinery to create an on-stage volcanic eruption, huge crowd scenes, historical subject matter and the largest orchestra yet to be seen in a French opera house. Though his production pushed the spectacular quality of French opera to new heights, the vast resources required to stage his opera kept performances of this work rare. Musical selections from the opera kept the memory of the work alive, especially the overture and this duet, which was performed at the inauguration of the Paris opera house, fifty years after the opera was first performed in its entirety.

Pablo Luna (1879-1942) EL NIÑO JUDÍO: De España vengo While there is an extant repertoire of Spanish opera, a separate genre of staged musical drama known as the zarzuela flourished in Spain with much more success, especially in Madrid. While its character changed slightly throughout the centuries, the main feature of the zarzuela is that it is a mixture or hybrid of vernacular songs, art music, and dances with spoken dialogue and some recitatives, often with many parts for female voices. Early zarzuelas were usually about rustic and pastoral themes, which later developed into comic stories about the lower and middle classes. Originally composed for royal entertainment, they became highly popular for the theatre-going middle class in the 18th century, and incorporated influences from Italian opera as well. When Pablo Luna began composing zarzuelas in 1905, he made his own contribution to the genre by including a patriotic song in every composition. This aria De España vengo is his most well known work.

Kurt Weill (1900-1950) The Threepenny Opera: Mack the Knife The tale of “Mack The Knife” goes all the way back to the 18th century. Macheath was a character in John Gay’s 18th-century ballad opera The Beggar’s Opera, a groundbreaking work all about the lower-class poor. In 1928, Kurt Weill and Bertolt Brecht adapted the opera into a new German work called Die Dreigroschenoper or The Threepenny Opera. We probably know this song in English as performed by Bobby Darin or Ella Fitzgerald. That English version comes from a 1954 edition of the play, written after Weill’s death, as translated by composer Marc Blitzstein. Weill’s wife Lotte Lenya starred in both the versions of the show. In 1956, Columbia Records wanted to capitalize on this new English translation, so they brought in Lotte Lenya and Louis Armstrong to record jazz versions of “Mack The Knife.” Armstrong’s English version, using Blitzstein’s translation, became a hit, and made “Mack The Knife” a standard in American popular song.