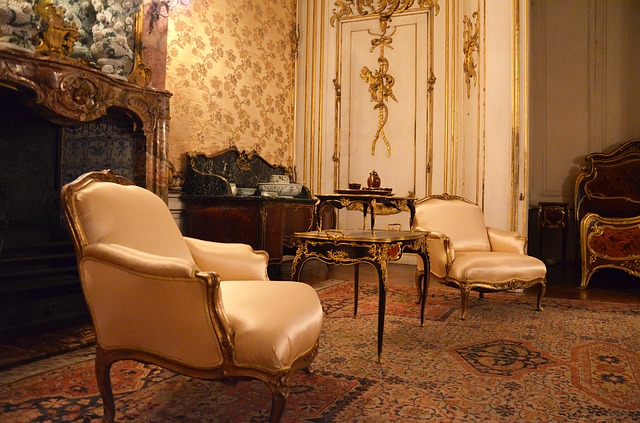 This week’s show is called Fully Furnished. We’re appraising our tables, beds, desks, and chairs with a show all about furniture in classical music. Browse our playlist below for some of our furnished favorites, and learn some trivia along the way.

Modeste Mussorgsky (1839-1881) Pictures at and Exhibition: Baba-Yaga When Mussorgsky died, he left many of his compositions unfinished. Rimsky-Korsakov finished Mussorgsky’s opera Khovanshchina, and created performing editions for other works, including the piano suite Pictures at an Exhibition. The suite comprises short movements that correspond to several paintings by artist Viktor Hartmann. One movement represents a painting of a clock Hartmann owned that looks like a cottage perched on the legs of a hen. The hut is the home of a sneaky Russian witch named Baba-Yaga. Pictures at an Exhibition has proven attractive to many orchestrators, with the best known setting by Maurice Ravel, the version we just listened to was done in 1994 by Émile Naoumoff who also performed in this recording.

Johannes Brahms (1833-1897) Tafellied It is curious that even though Brahams wrote such an extensive body of vocal music, this is the only known work specifically written for mixed chorus and piano. Tafellied, which translates to Table Song and is also called The Ladies’ Toasting Song, is a drinking song arranged as a back and forth dialogue between the male and female singing voices, alternating each verse until all join in for the exhilarating final chorus. Published in 1885, the piece was written to celebrate the 50th anniversary of the community choral society in Krefeld, Germany. The chosen text is a poem by Joseph von Eichendorff,  who was one of the most popular German writers and literary critics of the Romantic period.Eichendorff’s poetry was a favorite among composers; there are approximately 5,000 different musical settings of his poems alone. Tafellied is not the only time Brahams turned to drinking songs for his compositions, his popular Academic Festival Overture incorporates a potpourri of toasting tunes.

Arvo Pärt (b.1935) Spiegel im Spiegel (Mirror in Mirror) Arvo Pärt is typically grouped with a certain band of composers from the late-twentieth century informally referred to as “holy” or “mystic minimalists.” They used minimalist composition techniques—lots of repetition, minimal harmonic motion, simple melodic material—but composed with religion or mysticism in mind. His work Spiegel im Spiegel, which is German for Mirror in Mirror is an example of this. It’s a minimalist piece, using his unique style known as tintinnabuli, which imitates the slow, repetitive tolling of bells. In the case of this piece, tintinnabuli means the continuous tolling of a major triad, accompanied by stepwise motion to create a calm, minimalist landscape. You can hear the tintinnabuli style clearly in the piano. Around this piano tolling, the violin explores the major scale, creating a musical mirror that reflects over a single pitch.

John Adams (b.1947) The Chairman Dances John Adams scored his first big operatic “hit” in 1985 with the opera Nixon in China. The piece was immediately a huge success for the young composer and, along with Phillip Glass’ Einstein on the Beach, is considered one of the cornerstones of American minimalist music. The opera focuses on President Nixon’s landmark visit to China in 1972 and pays particular attention to the complex relationships between the political leaders involved. At the beginning of Act 3, the characters begin dancing a foxtrot as they look back on their individual pasts. Adams later took elements of this dance scene and created an extended symphonic work, The Chairman Dances. The piece is meant to depict Madame Mao gatecrashing a presidential banquet, hanging paper lanterns, and performing a seductive dance. Chairman Mao descends from his portrait, and the two dance a foxtrot.

Georg Philipp Telemann (1681-1767) Musique de Table, Part III: Overture-Suite in B-flat Like Brahms’ Tafellied, Georg Philipp Telemann composed several sets of Tafelmusik, first titled Musique de Table. Telemann’s composition, though, has little in common with Brahm’s drinking song. Telemann used the phrase “Table Music” to describe this collection as more of a little joke, a nod to an out of date genre of light, merry compositions that were meant to be played during noble feasts and banquets. The true character of this Tafelmusik is hgh status above all else. Each set (which consisted of between three and seven pieces, often in the style of French and Italian dances or sonatas) was sold by subscription to wealthy patrons. Telemann was in his 50s when he published his Tafelmusik, and was considered one of the foremost composers in Europe. Thus the cost of the subscription was exorbitant to say the least; one subscription was equal to the amount J.S. Bach was given in Leipzig to pay his entire orchestra.

Maurice Ravel (1875-1937) L'Enfant et les sortilèges, M.71 / Deuxième partie - Il est bon, l'Enfant, il est sage In this short  operetta, A rude child begins to destroy the furniture and objects in his room while throwing a tantrum. To his surprise the furniture comes to life and sings about how unhappy they are and how they wish the child to be punished for his misdeeds. The room turns into a garden and the child meets animals and plants he has also harassed. The animals shun him for his behavior, eventually desiring revenge, and after a tussle the child repents out of loneliness and sorrow. When he bandages an injured squirrel, the animals have a change of heart and help the child home. This child-like fantasy comes from the libretto of a french writer known by the mononym Colette, who is probably best known for writing the novel after which the popular musical Gigi is based. The Child and the Spells is the only collaboration between Colette and Ravel, the composer is not known for finishing operas, having only completed two during his lifetime.

Erik Satie (1866-1925) Furniture Music: Wall-lining in a chief officer's office It might be hard to believe that something as inoffensive and middle of the road as “muzak” (that is ambient music or background music) could have its roots in surrealism. But in 1920 when Erik Satie premiered his Musique D’Ameublement or Furniture Music at the Galerie Barbazanges this was exactly the case. With his usual convention-busting wit, innovation and sense of the absurd, Satie envisioned a kind of music that was meant to be ignored, that could accompany house interiors and be a soundtrack for daily life. Satie wrote and officially published 5 short pieces of furniture music, which could be repeated indefinitely. However sections in other works were given the same designation. Many years after Satie’s death, the American composer John Cage revived furniture music, where it became a major influence for the development of minimalism.

Adler, Samuel (b.1928) Rocking Horse Winner Samuel Adler referred to this piece as a  quote “psychological mini-drama, with as much operatic flare as possible.” The work is a musical setting of the first paragraph of a famous short story by D. H. Lawrence called The Rocking Horse Winner,” in which an English boy named Paul wins money for his destitute mother by betting his pocket money at a horse race. Paul believes that he is able to predict winning horses by riding his rocking horse for hours, putting himself into a trance state where the winning horses are revealed to him. He manages to win his mother 80,0000 pounds, but then in a sardonic twist, he dies of exhaustion after riding his rocking horse nonstop all night.

Lonnie Glosson (1908-2001) Rocking Chair Money  It’s because of songs like Hank William’s Rockin Chair Money that you can see a direct line between early cowboy country and the rock n’ roll of Elvis Presley. The bluesy quality of the song, combined with Williams crooning of “Rock, let’s rock, Rock on down the line” places the piece as a turning point, not only laying the groundwork for Presley’s sound, which also borrowed heavily from African American music, but for the creation of Rockabilly, which took both Williams and Presley as founding fathers. The “rockin’ chair money” made reference to in the song refers to the pay out earned by servicemen returning after a successful military campaign. In the case of this song’s narrator, its money earned after fighting in and surviving World War II