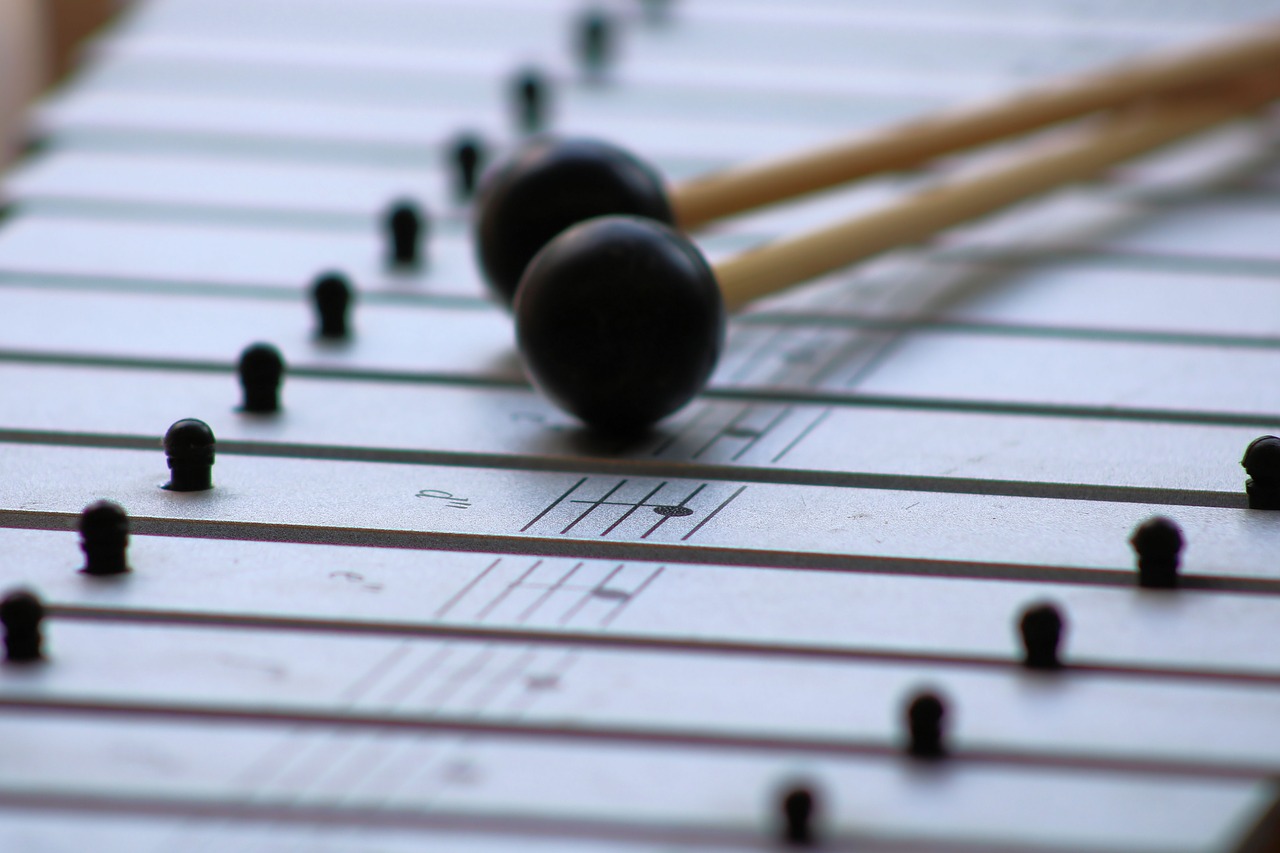 This week we celebrated idiophones on Ether Game. That's instruments like xylophones, bells, chimes, marimbas, and even maraccas!. Grab a pair of mallets and browse our playlist for Xylophonia.

Wolfgang Amadeus Mozart (1756-1791) The Magic Flute, K. 620: 'Ein Mädchen oder Weibchen' The most famous set of bells in opera history are probably the enchanted bells we hear accompanying Papageno in this aria from The Magic Flute. When we hear this piece, both Papageno and his friend Prince Tamino are enduring the initiation trials of the Brotherhood of Wisdom, a masonic-like group that helps Tamino rescue the Princess Pamina. Papageno gets swept up in Tamino’s quest because the brotherhood has also promised to give him a wife, a “Papagana,” should he pass their trails. During the lonely Trial of Silence, Papageno brings out his magic bells to accompany a song in which he sings about his lovesickness. For modern productions, the magic bells part is usually performed on a CELESTA. However in Mozart’s time it would have been played on a keyboard GLOCKENSPIEL. This consisted of a set of chimes that were connected to an organ manual, allowing more versatility than was possible with a set of mallets.

Richard Wagner (1813–1883) Das Rheingold: Scene III (Verwandlungsmusik)  In this opera scene from Das Rheingold, the first opera in his Ring Cycle, Wotan (the ruler of the gods) and his servant Loge have descended into the underground lair of the dwarf Alberich, in hopes that they can recover the gold that Alberich has stolen. They arrive to find that Alberich has converted the gold into a magical ring that’s given him unlimited power, which he uses to enslave all of the other dwarves. To depict the toiling of the dwarves, Wagner created a chorus of 18 tuned ANVILS to be struck in rhythm. Anvils are not uncommon in the percussion battery. However, Wagner’s anvils were all supposed to be tuned to the note F, which is rather difficult to achieve. Regular iron anvils don’t seem to do the trick, so percussionists have experimented with steel plates and even custom aluminum tubing to get just the right sound.

Camille Saint-Saëns (1835-1921) Le carnival des animaux [The Carnival of the Animals] XII. Fossils Camille Saint-Saëns composed Carnival of the Animals during the peak of his career. It's light, and pokes fun at Offenbach, Berlioz, Mendelssohn, and Rossini whose musical themes are  parodied, rearranged, and inverted, making the Carnival of the animals a satirical collage of musical taste in the late 19th century. Even Saint-Saens' own Danse Macabre,  gets the humorous treatment in Fossils, one of the two movements in the piece whose subject is not an animal, and also follows Danse Macabre in featuring the xylophone. Saint-Saens disliked the reputation he earned for writing “light” music after the success of his piano piece, The Wedding Cake. He suppressed performances of Carnival of the Animals after its premier to establish a reputation as a more serious composer. Later, he would  not even permit performances during his lifetime. As a result, the humorous verses often used between the movements of the piece came considerably later, and were written by poet OGDEN NASH.

John Williams (b.1932) Summon the Heroes John Williams’s importance as a composer begins with his influence in film music, most famously in Star Wars. We’ve pointed out many times on Ether Game how Holst’s The Planets influenced William’s sound for the score to Star Wars, and after the success of those films Williams would continue to build on Holst’s orchestration and textures as a key characteristic of his style, even to his pieces composed outside of film. Williams wrote Summon the Heroes for the 1996 Olympic opening ceremonies, and one of the features that he incorporates from Holst is the use of idiophones in the symphonic percussion section, especially chimes, tubular bells and glockenspiel. In Summon the Heroes you can hear the tubular bells distinctly in the transition to the finale march, where they have a short solo. Holst was among the first composers to make these instruments a staple of the symphony orchestra, and Williams would go on to use them to even greater effect in his music to the Harry Potter films.

Dmitri Kabalevsky (1904-1987) The Comedians, Op. 26: Prologue, Galop, March, Waltz Originally written as incidental music for a work of children’s theater, Dmitri Kabalevsky’s suite“The Comedians” has become the composer’s most popular work, with the Comedians' Galop as the most recognized movement of the suite. Kabalevsky had a unique position as one of the more high-profile, yet less troublesome Soviet composers. His music escaped the serious government attacks which had beleaguered Prokofiev and Shostakovich, among many others. Although distanced from many of his colleagues by his rejection of modern music, Kabalevsky found perhaps his best audience in his works for children. The suite we just heard is based on incidental music that he wrote for a children's play, in which the inventor Johannes Gutenberg is accosted by a group of traveling buffoons. Kabalevsky was a passionate supporter of musical education, writing both for a young audience, as in “The Comedians,” and writing choral and instrumental music aimed at student performers

Steve Reich (b.1936) Music for 18 Musicians Composer and native New Yorker Steve Reich hit the scene in the 1960s by experimenting with loops of recorded sound and trying out phasing experiments, where one line of music slowly moves out of sync with another line of music, causing strange combinations of notes. His early works “It’s Gonna Rain” and “Come Out” test out this experiment with tape loop, whereas Piano Phase, Violin Phase, and Clapping Music, bring it into the realm of live performance. In 1976, Reich produced this breakthrough work, Music for 18 Musicians. The work cycles through 11 chords, with different larger sections based on one of those 11 chords. Marimba, xylophone and metallophone are all used in a performance of this piece, the metallophone is of particular importance as it signals when the musicians should change patterns or move on to a new section. Music For 18 Musicians had its premiere in New York’s Town Hall. Not long after, it found an even larger audience when Reich recorded it with his own percussion-oriented ensemble.

Richard and Robert Shermann (1968) Me Ol' Bam-boo Albert Broccoli is remembered as the man who brought us the first film adaptations of Ian Flemming’s James Bond books. However, Broccoli had many side projects, including the adoption of another Flemmings book, Chitty Chitty Bang Bang, into a movie musical. Although produced by Broccoli, the film is often mistaken for a Disney film, with its many similarities to Mary Poppins: the composers and lyricists for Mary Poppins, Bob and Dick Shermann, wrote music for the film, and the spectacular Dick van Dyke was cast in the lead role as Caractacus Potts. We just heard one of the most memorable dance numbers from the film, Me Ol’ Bam-boo, in which van Dyke and 15 other dancers perform as English Morris dancers in a high energy routine, accompanied by an entourage of xylophone players. This number might also seem like it came from Mary Poppins. It was choreographed by Marc Breaux and Dee Dee Wood, who created the chimney sweep dance Steppin’ Time, for Disney and van Dyke only four years earlier.

Giorgio Mainerio (1540-1582) Ballo Francese We don’t often see the xylophone appear in historical performance practice, but its presence in Early music is well documented. When Italian composer Giorgio Mainerio completed a collection of instrumental dances, in 1578, titled Il primo libro de' balli, the xylophone had already been mentioned by Agricola in his Musica instrumentalis deudsch from 1538. Agricola referred to the instrument as a “strohfiedel” or straw fiddle, because this simpler version of the xylophone consisted of tuned slates of wood laid over ropes of straw to allow resonance. Almost a century later, Michael Praetorius would produce an image of the xylophone in his Theatrum instrumentorum which he called “les eschelletes,” seventeen bars of wood suspended on ropes in the layout of a keyboard.  During Renaissance, this instrument was associated with street musicians and itinerant music-making. It wasn’t until the 19th century that the xylophone finally appeared in the symphonic concert hall.

Oscar Peterson ( 1925-2007) Work Song The Canadian master of jazz piano Oscar Peterson released the album Very Tall with his trio in 1961. The album was the pianist’s first collaboration with vibraphonist Milt Jackson, who began his career in Dizzie Gillespie’s sextet, but would go on to become the foremost jazz vibraphonist of his era, particular in swing and bop music. With his virtuosic command of the vibraphone, or vibraharp as it is sometimes called, Jackson, who was nicknamed Bags, developed a distinctive warm sound and tone using electrically powered oscillator discs, which when placed below the blocks of the vibraphone allow it to produce vibrato of different intensities. The O.P. and Bags collaboration proved to be so successful that they made four more albums together during the 70’s and 80’s. In his performance career spanning 60 years, Peterson earned seven grammys before his death in 2007.