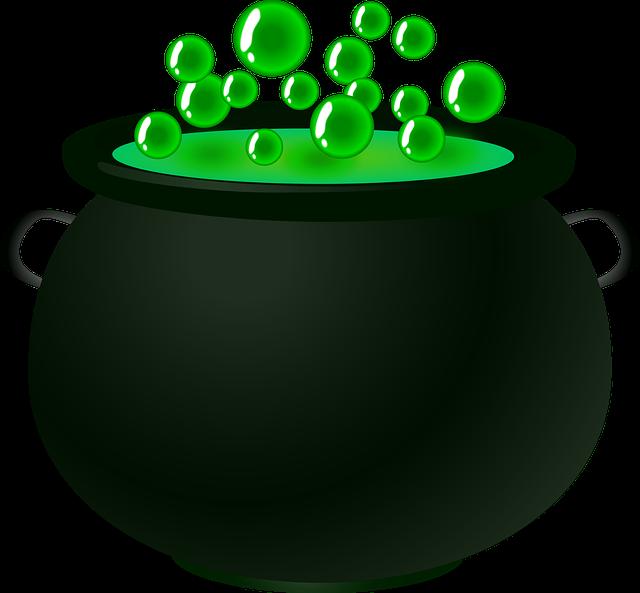 Ether Game continues its spooktacular month of exploring monsters in classical music! This week, get ready for some double double, toil and trouble as we hop on our broomsticks to examine music about witches and warlocks.

Modeste Mussorgsky (1839-1881) Pictures at an Exhibition (solo piano version) The Hut on Fowl's Leg (Baba Yaga) When Mussorgsky died, he left many of his compositions unfinished. Rimsky-Korsakov finished Mussorgsky’s opera Khovanshchina, and created performing editions for other works, including the piano suite Pictures at an Exhibition. The suite comprises short movements that correspond to several paintings by artist Viktor Hartmann. One movement represents a painting of a clock Hartmann owned that looks like a cottage perched on the legs of a hen. The hut is the home of a sneaky Russian witch named Baba-Yaga, who appears in many Russian folktales, and many pieces of classical music. Besides Mussorgsky, she also inspired Lyadov, Rimsky-Korsokov and Dargomyzhsky, to name a few. Alongside her poultry-padded hut, she is identified by her iron teeth, and for flying around in a giant mortar and pestle, with an enchanted broom as a rocket.

Felix Mendelssohn (1809-1847) Twelve Songs, OP. 8: No. 8, Andres Maienlied ('Hexenlied') Mendelssohn composed and published his Twelve Songs for voice and piano between 1824 and 1828, when he was only fifteen years old . Notably, the second song, titled Homesickness, was actually written by his sister Fanny, but the Mendelssohn status as an upper class family made it impossible for a woman to publish under her own name at the time. Another trick presents itself in the collection: No. 8, the Hexenlied or Witch’s Song, begins as a typical Maying song, celebrating the beauties of Spring. By verse two however, the song takes a dark turn, describing a spooky witch’s ritual. The lyrics describe how the coven dances for Beelzebub, a dragon appears, and the whole ghostly throng goes flying into the air on their broomsticks.

Giuseppe Verdi (1813-1901) Macbeth: Opening to Act 1 Of all of the great opera composers, Giuseppe Verdi was the most fascinated with the works of William Shakespeare. Like other composers, he saw a great deal of dramatic potential in these plays and set three of them as operas during his career. While his last two operas Otello and Falstaff are dramatic and musical masterpieces of their own, Verdi composed his first Shakespearean opera, Macbeth, way back in 1847. It’s interesting to note that Verdi didn’t even see a production of Shakespeare’s original play until after the first performance of his opera! Verdi’s Macbeth follows fairly closely to the original play with some differences, most notably a chorus of witches who sing in three-part harmony compared to three individual witches at the beginning of Act 1.

Englebert Humperdinck (1854-1921) Hansel and Gretel: Prelude to Act. II: The Witch's Ride Traditionally, the titular roles of Humperdinck's Hansel und Gretel are performed by two adult mezzo-sopranos. However, when Humperdinck first began composing music for the opera, it was with much younger singers in mind. In April 1890, Humperdinck’s sister gave him four songs from Grimm’s fairy tale Hänsel und Gretel, and asked the composer to provide music for them for her children to sing. Humperdinck was looking for a libretto for a comic opera, and expanded the songs into a Singspiel. The role of the Gingerbread Witch is also traditionally sung by a mezzo-soprano, but in a beautiful production staged at the Met in 2008, the role was given to a male tenor, making the witch more whimsical, but also more creepy and predatory. Since that production, the Met has continued to stage a Christmas production of Hansel and Gretel, with the role of the witch sung by a tenor.

Edward MacDowell (1860-1908) Hexentanz [Witches' dance], Op. 17, No. 2  A contemporary of Mahler, pupil of Raff and protégé of Liszt, American-born composer Edward MacDowell’s works greatly reflect the influence of his studies in France and Germany during the 19th century.  Considered to be one of the most important American composers of his day, MacDowell is perhaps best remembered for the artist and musician retreat named in his honor, which is located in the composer’s summer house in Peterborough, New Hampshire. Of his work, the devilishly dexterous Hexentanz is one of his most popular and well known. Originally composed as the second of Two Fantasy Pieces for piano, The Witches’ Dance signals MacDowell’s mature style of his later work, and even though McDowell eventually thought this piece was too flashy and shallow, it was always prepared as part of his repertoire.

Malcolm Arnold (1921-2006) Tam o' Shanter Overture, Op. 51 Robert Burns’ cautionary poem “Tam O’ Shanter” has been given a musical adaptation by many composers, including George Chadwick, who was featured in last week’s Ether game. However, Scottish composer Malcom Arnold’s overture is considered the most authentic. In Burns’ long narrative poem, the drunkard Tam O’Shanter is warned that unless he sobers up he will be captured by warlocks. After recklessly setting out on his horse one night during a thunderstorm, Tam O’Shanter encounters a wild frenzy of witches and warlocks dancing in an abandoned church. The devil accompanies the dance with the bagpipes and the ghastly scene is lit with torches held by corpses in open coffins.  Tam gives himself away when he catcalls one of the dancing witches and is pursued by the fiendish horde. He barely escapes with his life by crossing a bridge, since occult beings can’t cross running water. However, his poor horse loses its tail when it is snatched by a witch during the pursuit.

Peter Warlock (1894-1930) Capriol Suite If the name “Peter Warlock” sounds too fantastical to be real, that’s because it is. Warlock’s real name is Philip Heseltine, who was born into a well-to-do British family of stockbrokers, solicitors and art connoisseurs. He became interested in music but was unable to submit to the rigors of formal education. After a brief stint as a music critic, he quit and began studying and editing Elizabethan music at the Royal Library. Inspired there by the names of successful composers he studied and the occult, he decided to publish his own music under the evocative name Peter Warlock. We can also hear that early music influence in one of his most famous pieces, his Capriol Suite. Arranged here for guitar quartet, the suite was first written for piano duet and later as an orchestral work, and takes much of its material from French Renaissance dances.

Robert Carver (1490-1546) O bone Jesu The Ether Game Brain Trust selected Robert Carver for this week’s super stumper because, as both a composer and clergyman in early 1500’s Scotland, he would have certainly encountered the word “warlock”  and perhaps even men accused of being warlocks themselves. The word “warlock” comes from the old English word waerloga meaning “oathbreaker,” but the change of its definition to refer to a male practitioner of witchcraft is a Scottish invention from the Renaissance. It may be no accident, then, that one of history’s most famous warlocks, or at least a suspected one was Scottish, the mathematician John Napier. The marvelous nature of his many inventions led to rumors that Napier had studied sourcery. However, musicians are forever in his debt because he invented logarithms, which form the basis of the equal temperament tuning system used today.