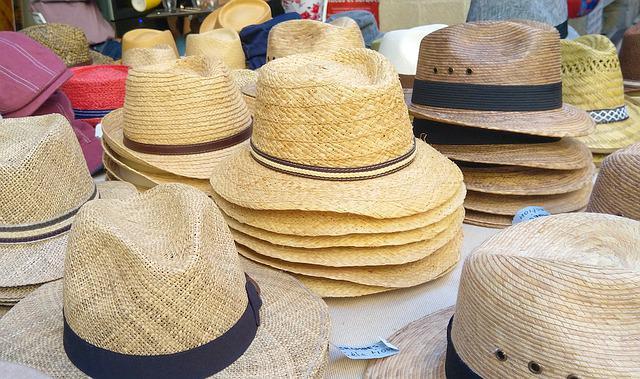 This week, our show was called Musical Millinery. Peruse our musical hat tree below and see if any caps, bonnets or helmets fit.

John Philip Sousa (1854-1932) Nobles of the Mystic Shrine Sousa composed this march in 1922 to commemorate his admission to the Shriners, specifically to the Almas Temple in Washington D.C. The premiere was a grand affair at Griffith’s Stadium with Sousa conducting an enormous concert band of over 6’000 shriners.    Included among the ranks of military percussion was an obscure, 18th century drum corps instrument called the “chapeau chinois” or Chinese hat. Also called the Turkish Crescent, it consists of many small bells which are suspended around a conical brass disk and put atop a large pole. The player shakes the pole up and down, causing the bells to ring in the manner of Turkish military band music. The chapeau chinois is rarely seen today, but has a place in a few compositions from the standard repertoire, including Berlioz’s Funeral and Triumphal Symphony and Haydn’s 100th symphony.

George Frideric Handel (1685-1759) The King shall rejoice, HWV 260 Handel composed four anthems for the coronation of King George II and Queen Caroline in the fall of 1727. This anthem, with text from the Book of Psalms, was meant to be sung at the moment right after the king was crowned. The musical forces gathered for this event would’ve been substantial, with a massive orchestra and the combined choirs of the Chapel Royal and Westminster Abbey. Even before her crowning, Queen Caroline had been a generous patron of the arts and sciences, hosting luminary figures such as Pope, Newton and Voltaire regularly at her salon. She was also responsible for Handels appointment as the Kapellmeister of Hanover in 1710, and five of Handel’s “Italian” chamber duets resulted from her commissions. Several of his operas are also dedicated to her.

Jerry Herman (1931-2019) Ribbons Down My Back (from Hello Dolly!) In Jerry Herman’s hit 1964 musical Hello Dolly!, one of the leading characters is a millner (that is a hat-maker) who runs a ladies’ hat shop in New York City. Irene Molloy’s first song in the musical, titled “Ribbons Down My Back” uses what would’ve been considered a provocative fashion trend to signal that she is ready to attract a gentleman, though later we learn that she intends to marry for money and stability rather than love. Despite Hello Dolly’s overall light-hearted tone, three of its main characters are widowed, and the musical’s emotional heft considers how one can find love again after a period of grieving. This was perhaps better portrayed in the stage production rather than Hello Dolly’s 1969 film adaptation which, despite intensely elaborate and expensive sets and costumes, was criticized for lacking the emotional depth of the original.

Dmitri Shostakovich (1906-1975) Symphony No. in c, Op. 60 'Leningrad' Shostakovich’s Symphony No. 7 is to this day, regarded as an important musical tribute to the 25 million Soviet citizens who lost their lives in World War II. The symphony has been named “Leningrad,” the city where he wrote the first three movements. At the time of the symphony’s completion in 1942, a TIME Magazine cover also appeared featuring the 34 year old Shostakovich with an elaborate piece of headgear: a fire brigade helmet. Shostakovich joined the Leningrad fire brigade after he was rejected from military service due to his poor eyesight. Still intent on defending the city, he joined a crew assigned to quell fires at the prestigious music conservatory and surrounding buildings, in case they were shelled by German artillery. Although given a full uniform and photographed for the war effort, Shostakovich’s role in the brigade was mostly sympbolic. When danger struck, the conservatory directors had a habit of arranging for their most valuable faculty to be elsewhere.

Richard Wagner (1813-1883) Das Rheingold: Scene III Das Rheingold is the opera for the first evening of Wagner’s four opera cycle Der Ring des Nibelungen [“The Ring of the Nibelungs”]. In the first act, the dwarf Alberich is mocked by the capricious Rhinemaidens who live in the Rhine River. Under the water, Alberich discovers the gold that they guard, and is told that the gold can be made into a ring that will give the wearer limitless power, but only he who renounces love can fashion the ring. Hungry for wealth and power, Albrich wrests the gold away from the Rhinemaidens and renounces love, giving him the power to create and wield the ring. In scene 3, Albrecht heads to Nibelheim where he enslaves his dwarf brethren with the power of the ring. He forces his brother to forge a magic helmet, called the Tarnhelm, which allows the wearer to turn invisible (sound familiar?), as well as change shape and travel great distances in an instant. Like the ring itself, the Tarnhelm remains a significant object throughout the Ring cycle, used finally by Segried in Götterdämmerung to meet Brünnhilde.

Manuel de Falla (1876-1946) The Three Cornered Hat: Introduction and Part I Manuel de Falla’s ballet The Three-Cornered Hat was a product of Sergei Diaghilev’s Ballet Russes, the same creative crucible that forged Stravinsky’s The Rite of Spring and Debussy’s Afternoon of a Faun. Diaghilev was known for assembling the best creative minds in Europe, and the original production of this ballet was no exception. The creative team here even included the great artist Pablo Picasso, who was tasked with designing the sets and costumes! The Three-Cornered Hat is a comical story about a man of authority—the Corregidor, donning the titular three-cornered hat—who uses his authority to woo the young wife of a lowly miller. Several tunes are borrowed in this work, including part of Beethoven’s Fifth Symphony, as well as some authentic Spanish folk tunes used during the solo dances of the miller and his wife.

Jacques Ibert (1890-1962) Divertissement An amusement, diversion or entertainment, perhaps no piece better exemplifies the French definition of the word “Diverstissment, then this work by Jacque Ibert. The composer produced this showpiece from incidentental music he wrote to a 1929 production of one of the greatest French farces, The Italian Straw Hat, by Eugène Labiche. The plot of this play is winding and chaotic. In a nutshell, a soon-to-be-married bachelor named Ferdinand spends the hours before his wedding in search of a replacement straw hat for one that was consumed by his carriage horse while it was hanging on a bush. The original hat happened to be owned by an ex-girlfriend. As Ferdinand rushes all over Paris to find an exact copy of the hat, he is pursued by his fiance’s party, who believe he is hastening to the wedding. All is eventually resolved when an old uncle produces his wedding gift, which happens to be an exact copy of the straw hat.

Christopher Simpson (c. 1605-1669) Divisions: Set 4 The Lilly Library, here at Indiana University, has several significant musical works in its manuscript collection. One of its Renaissance music gems is a 1667 2nd edition printing of The Division Viol by English musician, composer and Royalist soldier Christopher Simpson. His publication, The Division Viol, is still regarded by Early Music specialists as a pre-eminent text for viola da gamba technique. One of its many helpful features is its cover, which shows a portrait of Simpson sitting at his viol with bow in hand, ready to play, allowing us to know how the instrument was positioned for playing. This portrait is also notable in that it contains a major change from the original 1665 printing. For the 2nd printing, the engraver has removed a large, wide-brimmed hat worn by Simpson, and left his head unadorned. The thought is that, by 1667, this hat was considered old-fashioned in England, and music vendors did not want potential buyers to also think that the music contained was out of style!

English Trad All Around My Hat A revival of roots music in England had been well underway since the early 50’s, but it wasn’t until the late 60’s that musicians started to blend traditional English folk music with a contemporary rock sound. One pioneering band of this new folk-rock genre was Steeleye Span. Named after a tragic character in the traditional ballad Horkstow Grange, Steeleye Span had a frequently shifting line-up over the years which included legendary folk musicians such as Martin Carthy and Maddy Prior. After performing in small folk music clubs for a few years, their break-through into mainstream success came in 1973 when their a capella carol Gaudette made the Christmas music charts, and when this track charted at number five two years later..