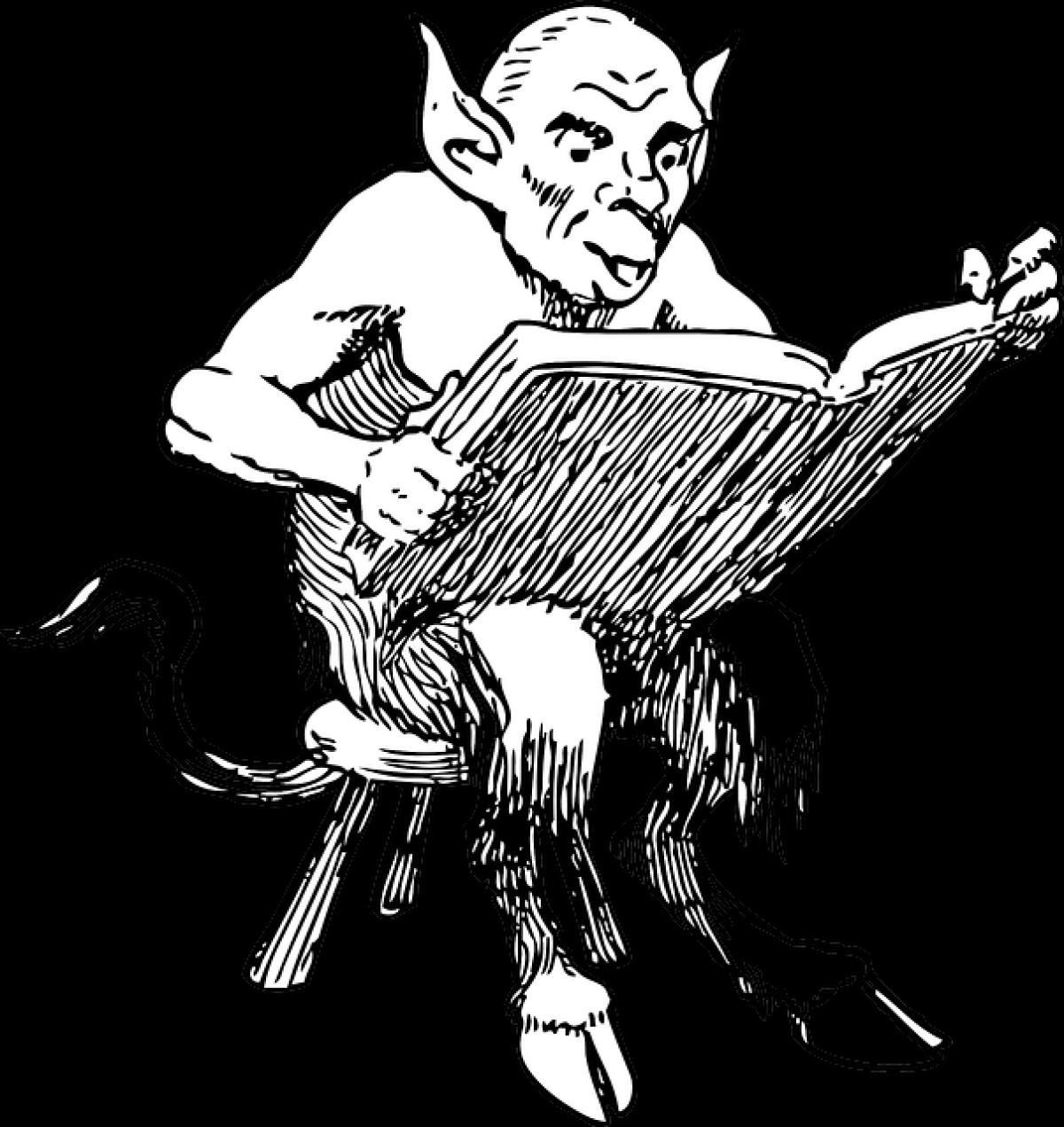 Mephistopheles is our Master of Ceremonies for tonight’s Ether Game, as we continue with our Monster Mash of classical music trivia. Browse our playlist for part three, Devils and Demons

Nicolai Rimsky-Korsakov (1844-1908) Christmas Eve: Suite It may seem odd that we chose a Christmas piece for the first round of one of our Halloween shows, but the devil is a major character in Rimsky-Korsokov’s 1895 opera Christmas Eve. In the libretto based on Nikolai Gogol’s short story of the same name, a village blacksmith mocks the devil. The devil gets his revenge by conspiring with the blacksmith’s mother, who is a witch, in order to steal the moon. There is much confusion in the complete nocturnal darkness, and the devil takes advantage of the situation to bargain for souls, though he is ultimately unsuccessful. This is a very simplified summary, the actual plot of the opera is pretty convoluted, and fearing the worst, Rimsky-Korsokov took many of the dances and carols from his opera and arranged them into an orchestral suite, which  was ultimately a greater success.

Giacomo Meyerbeer (1791-1864) Robert le Diable: Overture The great spectacle and success of his French operas written during the 1830’s led Meyerbeer to earn the title “the father of grand opera.” Before he completed his masterpiece The Huguenots, he wrote an opera loosely based on a medieval French legend known as “Robert the Devil”. In the legend, a Norman knight discovers he is the son of Satan, as his mother had called on Hell for a son in a fit of despair. The connection causes Robert to lead an exceptionally sinful life, however he is able to find redemption in the end. This story forms a loose framework for Meyerbeer’s opera of the same name, which is fleshed out with melodramatic episodes and political drama. It became infamous for its elaborate hellish and demonic imagery, which includes a ballet sequence of the ghosts of debauched nuns praising the vices.

Maurice Ravel (1875-1937) Gaspard de la nuit As if his previous suite of piano music Miroires isn't challenging enough, Ravel’s musical triptych Gaspard de la Nuit is intentionally difficult to play. Ravel’s complex chromatic harmonies evoke the hallucinatory exploration of terror, the macabre, and the surreal dreamscapes which make up the source material.. Ravel selected three  poems from Aloysius Bertrand’s posthumously published collection Gaspard of the Night — Fantasies in the Manner of Rembrandt and Callot. The phantasmagoric visions in Bertrand’s groundbreaking prose poetry set the stage for early Gothic literature writers like Edgar Allen Poe. However this collection is practically unknown outside of France and was never fully translated until 1977. An introduction to the collection strongly implies that its true author is the Devil, and Ravel even referenced this, commenting “Gaspard has been a devil in coming, but that is only logical since it was he who is the author of the poems.” The entire composition is a tour de force for any pianist who is up to it, but it is the third movement Scarbo which describes a devilish imp that is considered one the most difficult piano pieces ever written.

Giuseppe Tartini (1692-1770) Violin Sonata in g, 'Devil's Trill' Instead of me telling the story of how Tartini composed the “Devil’s Trill” sonata, I’ll leave that up to French astronomer Jerome Lalande, who recounted Tartini’s words in his memoir Voyage to France and Italy. I quote: “One night, in the year 1713, I, Tartini, dreamed I had made a pact with the devil for my soul. Everything went as I wished: my new servant anticipated my every desire ... I gave him my violin to see if he could play. How great was my astonishment on hearing a sonata so wonderful and so beautiful, played with such great art and intelligence, as I had never even conceived in my boldest flights of fantasy. I felt enraptured, transported, enchanted: my breath failed me, and—I awoke. I immediately grasped my violin in order to retain, in part at least, the impression of my dream. In vain! The music which I at this time composed is indeed the best that I ever wrote, and I still call it the ‘Devil's Trill.’

Arrigo Boito (1842-1918) Prologue to Mefistofele: Instrumental Scherzo and Dramatic Intermezzo The first performance of Boito’s Mefistofele was a fiasco for several reasons. Boito was inexperienced, and the libretto, which Boito wrote himself, was way too long.   On top of that, the cast was largely inadequate. The advance promotion of the work by Boito’s partisans and a few influential critics hoping for changes in conventional Italian opera antagonized a large sector of the conservative Milanese public and musical press. Only the “Prologue in Heaven” was well received, but that came early in a stormy evening that lasted until well after midnight. Boito thoroughly revised and shortened the work, which became more successful than the original version.

Alexander Scriabin (1872-1915) Piano Sonata No. 9, Op. 68 'Messe noire' [Black Mass] The Russian composer and pianist Alexander Scriabin was one of the most creative, and yet simultaneously controversial, composers of his day. According to his biographer, “No one was more famous during their lifetime, and few were more quickly ignored after death.” This polarity has defined Scriabin’s legacy, and much of his music is, to this day, considered a bit offbeat.  His ninth piano sonata is one of his most esoteric works.. Scriabin referred to the sonata as “La Poème Satanique,” though listeners later dubbed the work the “Black Mass” sonata as its nightmarish unstable harmonies and utter lack of sentimentality were in stark contrast to Scriabin’s previous “White Mass” piano sonata. This was actually not the composer’s first run-in with the satanic. He believed he had been possessed by the Devil when he wrote his sixth piano sonata, and Scriabin thought the work so ghastly and corrupted by evil that he refused to perform it in public, and was compelled to immediately compose the “White Mass” sonata as a form of atonement.

Anton Rubinstein (1829-1894) The Demon: Ja tot, katoramu vnimala (the demon) Anton Rubinstein is probably a name you don’t hear very often in the top tier of great Russian composers. In addition to being a piano virtuoso on par with Franz Liszt and other greats of his time, Rubinstein was a well-respected teacher and founder of the St. Petersburg Conservatory. In fact, one of his most famous students was none other than Tchaikovsky himself! Rubinstein’s music, though seldom heard nowadays, had a great effect on the development of a Russian national style of music. This is particularly evident in his opera The Demon. The opera itself is a very strange piece, as it tells the story of a demon who seeks salvation in the love of a mortal woman. In many ways, the opera is a very flawed work, which explains why it was met with criticism for being “unoriginal” at its 1875 premiere. Despite the failure of The Demon to attract a devoted audience, many musical motifs in Rubinstein’s work later inspired comparable motifs in such Russian masterpieces as Tchaikovsky’s Eugene Onegin and Mussorgsky’s Boris Godunov.

Frederick Fox (b.1931) Devil's Tramping Ground Composer Frederick Fox earned his master's and doctoral degrees right next door to the WFIU studios, at Indiana University’s School of Music. In 1974, fifteen years later, Fox returned to campus, this time as a composition professor, where he founded IU’s New Music Ensemble. Since then, the NME has toured extensively, performing in New York, San Francisco, Washington D.C., Philadelphia, and even Kosovo. They’ve also released 10 CDs, including two of music exclusively by Frederick Fox. This septet, Devil’s Tramping Ground, was inspired by a time in rural areas of the U.S. when young folks would abscond into farmers’ fields at night to dance, a sinful activity among civilized folks. Like in the movie Footloose! Community elders, of course, knew why the farmers’ fields were mysteriously trampled, but instead of acknowledging the sinful activities of their children, they called those areas the “Devil’s Tramping Ground.”

David Shire (b. 1937) Night on Disco Mountain The iconic disco soundtrack to the John Travolta film Saturday Night Fever is mostly remembered for its inclusion of the Bee Gees most memorable songs: Stayin Alive, How Deep is Your Love, and Night Fever,  all charted at number one, and the entire album for Saturday Night Fever stayed at the top of the charts for 25 weeks in 1978. Slightly outshined by the Bee Gees was David Shire, a respected song writer in his own right who contributed original music for the soundtrack. The disco groove-infused rendition of Mussorgsky’s 1867 ghoulish classic, which depicted demons, witches and bogies celebrating St John’s Eve, was likely written by Shire as a direct response to the already famous A Fifth of Beethoven by Walter Murphy, which was also licensed to appear on the Saturday Night Fever Soundtrack. As a pair, Night on Disco Mountain and A Fifth of Beethoven became the most successful rock and classical synthesis to reach the billboards.